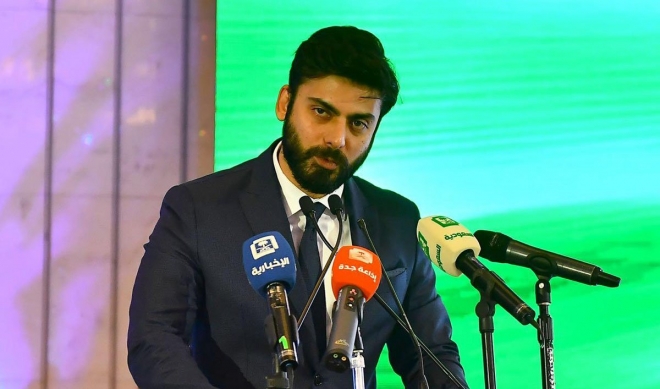 JEDDAH: Hajj means many things to many people — a show of devotion, a demonstration of solidarity with Muslims worldwide, and an opportunity to take part in rituals stretching back centuries.

But for award-winning Pakistani actor, model and singer Fawad Khan, the pilgrimage also offered a rare chance to escape the spotlight.

The 36-year-old Bollywood and soap opera star, an entertainment icon to millions in Pakistan and India, was among the celebrities hosted by Saudi Arabia’s Ministry of Media to perform Hajj this year. And the one thing that Khan enjoyed most about being at the Hajj was the anonymity that the pilgrimage promised.

“Being one among 2.4 million people is the easiest thing on earth,” he told Arab News during an exclusive interview at the Ritz-Carlton in Jeddah. “You feel comfortable because you are in the same space with other people who bare their hearts to God. You feel just like any other person among them. And you are not under media scrutiny as you are on normal days.

“It feels nice to be a face in the crowd.”

With his film-star looks, charismatic personality and high-profile acting background in Pakistani soap operas — including “Zindagi Gulzar Hai” — and Indian films, Khan is used to being mobbed by fans wherever he goes.

Khan said he is often frightened by the adulation he receives.

“When I wake up, I feel just as human as all people do,” he said. “When I see such a massive outpouring of affection and adulation, I feel frightened since being elevated to such a position is something to be feared. It is an honor, yes, but I also feel afraid because the responsibilities are greater.”

Few of his admirers are aware that Khan spent part of his childhood in the Saudi capital Riyadh, where his father was employed.

“I was in Riyadh from 1986 to 1992 as a child,” he said. “My mother is a very pious woman and when my father was posted to Riyadh, she would say, ‘I will never miss an opportunity to perform Umrah,’ so we used to perform Umrah every year.”

So how does Makkah compare now? “The number of pilgrims has increased many times over,” Khan said. “It was a very different time back then, but things have always been comfortable in Saudi Arabia. I remember seeing snow in Riyadh because of the extreme weather deserts sometimes have.”

What was his first impression when he saw the Holy Kaaba in Makkah’s Grand Mosque?

“It reminded me of my childhood,” he said. “I really enjoyed the time when I was growing up. When I left Riyadh, I was sad because those were my formative years. I had a feeling of nostalgia. I remember as a child when performing Umrah, there wasn’t much rush or traffic. The running between Safa and Marwa as part of the ritual was more like a game because I would race with my sister at that time and being there again brought all those memories back.

Khan was full of praise for the Media Ministry's arrangements for its guests.

#Hajj means many things, such as a show of devotion and a demonstration of solidarity with #Muslims worldwide. And for award-winning #Pakistani actor, model and singer #FawadKhan, it also offered a rare chance to escape the spotlight. @thefawsadkhan https://t.co/TWy9MIL08v pic.twitter.com/dUX0LkLzmn

— Arab News (@arabnews) August 27, 2018 “The Hajj was made very easy by the ministry. The facilities made everything comfortable despite the blistering heat,” he said.

“The arrangements were seamless. At Jamrat, where the stoning ritual takes place, there is a sea of people coming down and you feel like it is going to be impossible. Then you get into the crowd and you start moving slowly but comfortably. There is still space to move even though it looks like it is impossible. And then, suddenly, you are done. All this is possible only because there is an efficient security force and a government that is paying close attention to how everything is happening. And they are trying to make it flow as easily as possible. Kudos to them,” he said.

“And people are very helpful. There is obviously a language barrier, but you overcome that somehow.”

Khan praised his Saudi hosts, saying: “The banquet arranged for guests is a reflection of the host. A lot of love and affection goes into it. It is not about the quantity that you are given but the quality. And our experience was of the highest quality because there was a lot of care, love and affection in it. The pilgrimage was made very pleasurable.”

During a speech at a reception for the foreign delegates at Hajj, Khan congratulated King Salman and Crown Prince Mohammed bin Salman.

“I’d like to congratulate them for a successful Hajj, which was accomplished because of their sincere efforts,” he said in the presence of Media Minister Dr. Awwad Al-Awwad.

“I’m also happy to see that the message of peace and tolerance has been a continuous agenda, even with the slogan for the Hajj this year. The Kingdom has embraced the world with open arms.”

He said Saudi Arabia through its Vision 2030 is leading the Muslim world while projecting the Islamic values of moderation, tolerance and peaceful coexistence.

“The world today has huge respect and appreciation for the young crown prince, who has become an example for the younger Muslim generation,” he said.

What was the highlight of Khan’s pilgrimage? “The whole experience was very spiritual,” he said. “I remember on the night before the trek to Arafat, there was a wind blowing and it suddenly started raining, and lightning was streaking the sky. It was humbling and it felt like someone from on high was talking to us.”

Fawad Khan during the interview with Arab News at the Ritz Carlton in Jeddah. (AN photo)

The respect accorded to women was another Hajj highlight for him.

“The thing that I liked most was that women were respected in such a positive way. People gave way to women and were careful to help them, and that was something to acknowledge and admire,” he said.

The decision to perform Hajj came easily to Khan. “A close associate said to me, ‘When the call comes from Allah, you must go.’ So when we got the invitation from the Ministry of Media, we happily accepted it. This was the start and it was more like a guided tour. If I get the chance again, I’ll be quiet about it.”

As to what was in his mind when he was praying at Arafat, at the peak of the pilgrimage, he said: “First and foremost, my feelings were for all humanity. We consider this world to be a global village. We act upon it for very little time. We have boundaries and borders, which are things to be respected, but humanity is one group and, above all, everyone wants to pray for peace, love, kindness and bonds between everyone in this world, Muslim or not.

“Overall you pray for humanity, for the betterment of our children and for the entire world.”

People should undertake the pilgrimage when they are young, Khan said.

“My reason for saying that is not just because of the energy of the young and able,” he said, adding: “When you are younger, your mind is like a sponge and it absorbs more. I feel Hajj and Makkah is not only for the pilgrimage. When people from all over the world meet in groups in congregations, it is actually a means of cultural exchange.

“Imagine meeting 3 million Muslims coming from different backgrounds and all walks of life from many different countries and spending 10 days with them. It is the best form of communication. Being exposed to these things teaches you tolerance and gives you an invaluable form of education.”

Khan’s wife, Sadaf, who accompanied him, was happy with the pilgrimage, too. “She was very moved and she is going home carrying a lot of love,” Khan said.

With Saudi Arabia opening up to creative arts and cinema, what advice would Khan offer young Saudi filmmakers?

“Art is an expression and the less advice you give, the better,” he said. “Obviously, there are censorship policies, but then there are bodies in place to perform that duty. As an artist, I don’t have any advice when it comes to expression as far as art is concerned, but I do say this with words of encouragement for the youth out there: If I can do it, then anyone can do it.

“It will be an honor for me to have my movie screened in Riyadh, the place where I grew up. I wish the entertainment industry the very best and I hope to see Saudi collaborations with other filmmakers all over the world.”


⇐ Previous:
All aboard: The bus project that transformed Hajj transport in Makkah
Next: ⇒
US Olympic medalist Ibtihajj Muhammad reflects on her Hajj journey