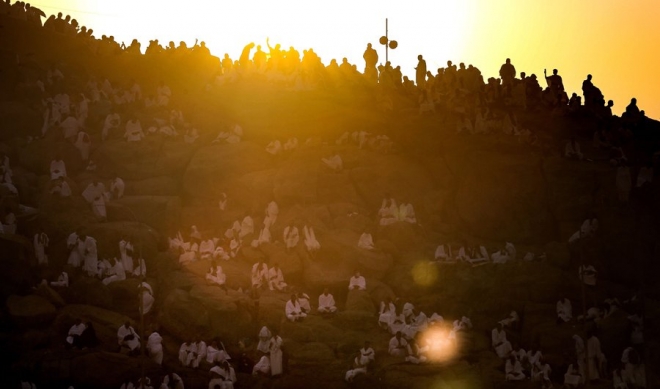 MAKKAH: Hajj may have a different meaning for different people.

Besides prayers, days of intense physical activities are a humbling experience and teaches the faithful to survive in tough conditions.

In Arafat and Muzdalifa, I found the philosophy of life in a journey that lasted a day and a night.

Even though preparations start early, the day of Arafat is the most intense part of Hajj.

Our start from the Mina camp was delayed because a wind storm the previous evening had hampered preparations.

Due to slow-moving traffic, fellow pilgrims decided to leave the bus and walk toward Arafat. I joined them too.

But when you have millions of people walking around you in the same attire, keeping track of fellow pilgrims becomes next to impossible.

To me it seemed getting separated from the group and losing my way is where the actual journey of Arafat started.

The heat in the Mount Arafat region was at its peak, so much so that I was not able to walk properly.

When the given address was nowhere to be found, I took refuge in a nearby camp housing pilgrims from Pakistan.

Pilgrims here not only gave me space to rest but also offered food and water and then guided me toward my destination.

On my way, I once again felt exhausted and this time decided to seek medical help from a nearby onsite government health care center.

At the clinic, staff were very responsive and efficient. They gave me ORS solution and I was back on my feet within minutes.

But, a few miles later, I felt exhausted again. With unbearable heat and surrounded by millions, I felt for a while that I wouldn't be able to survive and it was the end.

But there were more "Arafat angels" around to make things easier. The cleaner of a nearby camp rescued me this time around.

He took me inside a tent where several other pilgrims, separated from their groups, were trying to catch up with prayers.

This is when I decided not to waste time and energy in looking for my designated camp and instead spend the rest of my time here with the new Arafati family.

The group of people inside this tent were wonderful. None of us knew each other. All of us from different parts of world. We didn’t even speak the same language but we were all connected like a family.

The best part of the camp was a celebratory atmosphere about this special day in Arafat. They were praying as well as sharing food with each other. Some were reading the Qur’an, some were offering salat. And few were resting and having Kahwa.

The pilgrims also sang a very soulful Nasheed devoted to the day of Arafat.

Till this point I was worried about my health and whether I would be able to travel to Muzdalefa, our next stop.

A Burmese family in the tent offered to give me a ride.

Hence, soon after sunset, we started a new journey with strangers. Noor and his wife and sisters were extremely caring.

We all traveled together. We spent a night at Muzdalefa together and by dawn we parted ways.

Those 18 hours have been the experience of a lifetime for me.

A friend had rightly said: “Hajj is just a slight reflection of Youm Akhara (the Day of Judgment) when your loved ones will be nearby but you will still be all alone.”

During my Hajj journey, especially on Arafat day, I will never forget the souls as they came forward whenever we needed help the most.

I learned the most important lesson in life: How faith in oneself and others can help you sail through tough times.

Even if you are alone in the worst situation, Allah is there to rescue you. Just have faith!