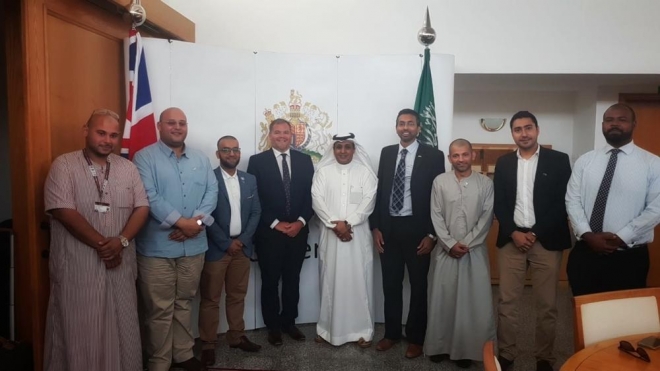 JEDDAH — British Consul General and his team recently welcomed a delegation the Council of British Hajis (CBHUK) at the consulate premises. They discussed issues affecting British pilgrims from mis-sold Haj packages and Hajj fraud to health related and welfare matters.

They lauded efforts by Saudi authorities in providing services to pilgrims and in keeping the Haj incident-free through enhanced crowd management techniques.

Barrie Peach Consul General) said: "I congratulate CBHUK for the important work that they do in supporting the needs of British pilgrims in close cooperation with the consulate".

Rashid Mogradia, leader of the delegation, said: "I would like to thank the consul general for hosting us and the cooperation extended by his team in the run-up to and during Haj.

Our ability to engage with local partners, volunteers and local government departments has allowed us to strengthen our network to support British pilgrims in cooperation with the consulate. This has ranged from pre-Haj travel advice to on the ground one to one interventions and sign posting to local services.

In particular we commend and praise the rapid response from the Saudi Ministry of Health in deploying a field team of nurses and doctors to a UK tour group where a case of over 20 members of the group had reported cases of projectile vomiting and diarrhea. Through our network and support from the ministry we were able to prevent a possible public health outbreak”.

Prince Islam Elsawy said: “We were honored to host the CBHUK team in our camps and witnessed first hand the important work they do in supporting British pilgrims in their life defining journey of Haj. I extend my thanks and appreciation to the British consulate team for visiting us and other licensed Haj organizers in the European camps during Haj.