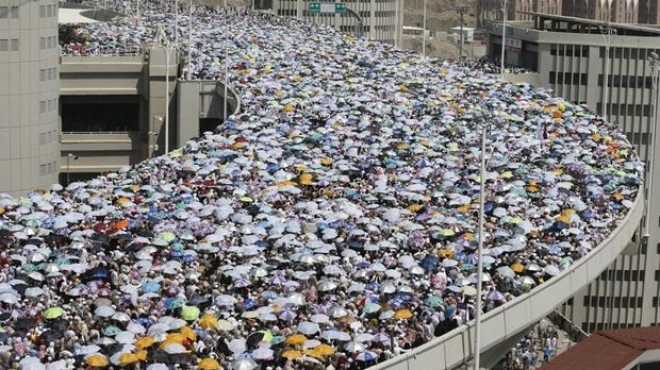 The Hajj attracts millions of pilgrims from across the world every year and involves several complex rituals, which means it is always a potentially dangerous event.

In recent years, great lengths have been taken to ensure the safety of pilgrims, with, according to Saudi government sources, more than £200bn spent since 1992 on redesigning the infrastructure of the Hajj, which involves events at several sites in and around the city of Mecca. One key way that organisers plan for the safety of crowd events such as the Hajj, but also parades, carnivals and sporting competitions, is by using computer simulations to model large groups of people.

A group of people at an event may all see themselves and each other as Muslims, Manchester United supporters, or music lovers, for example. This shared identity affects the behaviour of the crowd and is therefore imperative for understanding and predicting the crowd movements, including flow and congestion.

Recent research has shown that feelings of group identity may mean psychological crowds are easier for their members to cope with even if they are tightly packed or very slow moving because they feel safe within the group. But when there are several psychological crowds within the same physical space they can inadvertently limit the movement of one another.

Despite the importance of shared identity to understanding psychological crowds, computer modellers have so far either neglected crowd psychology in their models or treated crowds simply as a mass of identical individuals. Where groups are included within the crowd, the model has been to use small groups of two to five people. But the modellers have assumed that all crowds are simply physical crowds.

As a result, these simulations cannot adequately predict the behaviour of psychological crowds. A key issue, as mentioned, is that a physical crowd may contain more than one psychological crowd – for example, Sunni and Shia. So assuming that the crowd is simply made up of individuals who behave like particles or billiard balls in a mass doesn’t account for a number of features of crowds such as that at the Hajj.

This has several important implications for existing simulations of the event. For example, they can’t predict how different groups favour different locations in the Hajj, such as the Shia preference for worshipping in the open. This is particularly important due to the variety of rituals the pilgrimage involves. A model that treats the crowd as a homogeneous entity also can’t explain how large groups of people will try to stick together within a moving crowd, separating themselves from other groups and creating mass contraflows.

We should be wary of relying exclusively on computer models, however. They cannot give absolute predictions or guarantee safety. In order to avoid disasters, we also need to monitor the density and flow of crowds in real time to prevent these disasters from emerging. But by combining computer modelling with crowd psychology, we can better understand crowd behaviour and develop simulations that can make events safer and hopefully avoid disasters such as the events we have witnessed at the Hajj.