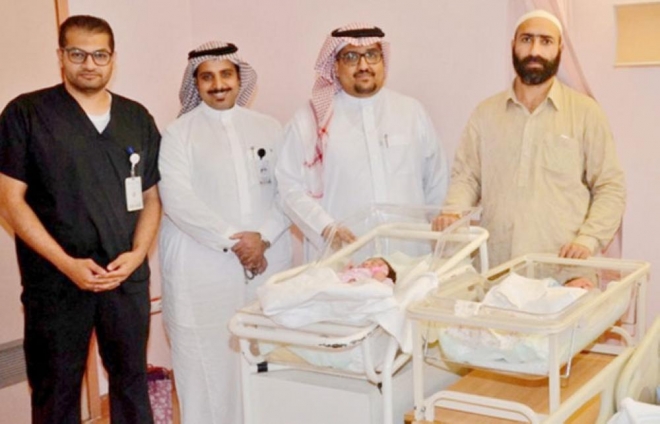 MADINAH — After suffering a sterility period of nine years, a Pakistani pilgrim completed her happiness of performing the Haj by giving birth to a healthy boy and a girl in Madinah Maternity and Child Hospital.

Gynecologists and obstetricians delivered the twins by a caesarian operation, according to Al-Hayat newspaper on Wednesday. The mother called them Haram and Hazar.

Gifts were poured on the mother from the hospital staff and the public who wished her and her twins a happy and prosperous life.

Meanwhile, doctors in the Madinah hospitals conducted 535 various surgeries for the visiting pilgrims including 180 heart catheters and 10 open-heart surgeries.

Ibrahim Al-Raddadi, director of the department of statistics of the health affairs, said as many as 222,374 pilgrims have benefited from the health services being offered by the medical institutions in the holy city.

He said of them, 205,503 were received by the primary health care centers.

Raddadi said the ER wardens and and the clinics received a total of 16,871 pilgrims while 5,842 benefited from the ambulance services during which they received medical treatment at the location or transported to the hospitals.

He also said as many as 444 kidney dialysis operations were done at various hospitals and health centers in Madinah.

Director of the department of health affairs, Dr. Abdul Hameed Al-Subhi, said the hospitals and the seasonal and permanent health centers would continue to provide the pilgrims with health care 24/7.

"We are working around-the-clock in full capacity to extend health services to the guests of God who are visiting Madinah to pay homage to Prophet Muhammad (peace be upon him) and pray at his mosque," he said.

On the other hand the directorate general of Passports Department (Jawazat) in a statement said a total of 800,385 pilgrims have so far left the Kingdom for their respective homes after performing the Haj.


⇐ Previous:
More than a million pilgrims have left Saudi Arabia after Hajj
Next: ⇒
How to make the Hajj safer by better understanding crowd psychology