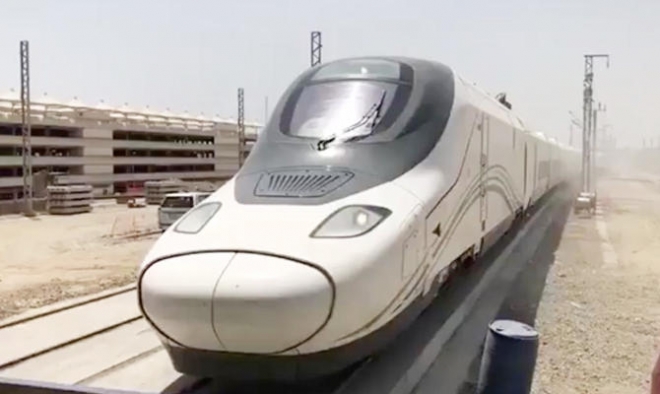 RIYADH: The Haramain high-speed railway running between Makkah, Madinah and Jeddah is in the final stages of operational testing before its inauguration, Minister of Transport Nabeel bin Mohammed Al-Amoudi said on Monday. “This 450-km rail facility will be soon open for the public,” he told Arab News.

Al-Amoudi, speaking on the sidelines of the rail Freight Solutions Forum, recently inspected station facilities and operational readiness of the track between the two holy cities, which can be covered in just 120 minutes. He said: “This investment will not only provide visiting Hajj and Umrah pilgrims with a first-class travel experience, but it will also boost economic development and create jobs.”

He said: “We have expansion plans and some master plans to be executed within the next few years. We are looking at the Saudi Land Bridge Project, which will connect Riyadh with Jeddah.”

The minister said that this project has been in the planning phase for some time. It is one of the biggest in the region, involving construction of 950 km of new line between Riyadh and Jeddah and another 115km track between Dammam and Jubail.

He said the Land Bridge project “will have a significant impact on the transport potential of the country.” With the construction of the Jeddah-Riyadh rail link, the time taken for passenger transport will be six hours instead of the current 10 to 12 using a bus, according to a report published recently. This project will adopt cutting-edge technology for the development of the new rail links.

Asked about the import of Greenbrier wagons from Poland, Al-Amoudi said: “We have received all the wagons, but not all of them are operational at the moment. They are going through the testing and commissioning phase.”

These wagons have been especially designed and produced for arid conditions. Protective materials were used to shield some components from sand and extreme temperatures in the Kingdom.