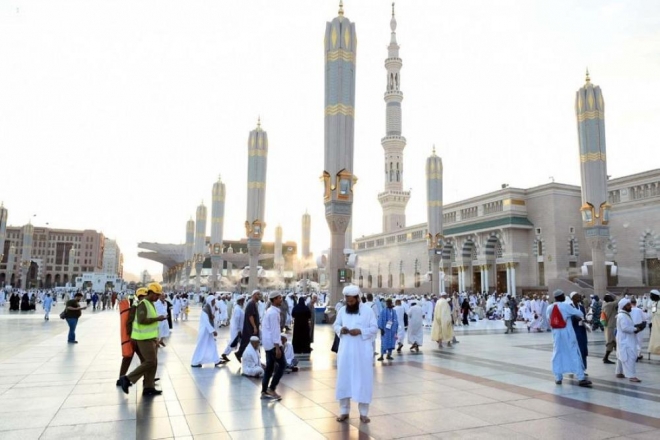 JEDDAH — As many as 1,141,998 pilgrims have so far departed for their respective home countries after completing their pilgrimage this year while 553,151 have arrived in Madinah to pay homage to Prophet Muhammad (peace be upon him) and pray at his mosque.

It said most of the pilgrims who came to Madinah from Makkah after performing the Haj have departed for their respective home countries while 194,373 still remained in the Prophet's City compared to 251,780 who remained in Madinah the same time last year.

According to the General Authority of Statistics (GaStat), the number of the domestic and foreign pilgrims this year increased by about 0.9 percent compared to last year.

The authority said the GCC pilgrims increased by 3.7 percent, the Asians 0.5 percent while pilgrims from Africa declined by about 10.9 percent.

The authority said the pilgrims were transported by 32,289 buses and added that as many as 131,006 Saudi pilgrims came from various regions while 108,956 were from Makkah.

It said 292,261 non-Saudi domestic pilgrims came from other various regions while 108,956 were from Makkah.

Egyptians who were 44,314 constituted the largest number of domestic pilgrims followed by Pakistanis, Indians, Yemenis and Sudanese.

It said about 53.7 percent of the domestic pilgrims arrived in Makkah on Dhul Hijja 7 (Aug. 18) while 31.3 percent of them arrived next day (Dhul Hijja 8 — Aug. 19) which was the Tarwiyyah day when the guests of God ascend to Mina to stay the night and go next day to Arafat which is the climax of the Haj pilgrimage.

The authority said a total of 91,678 domestic pilgrims entered Makkah through Al-Shumaisy police checkpoint on the Jeddah-Makkah Expressway while 70,600 entered via Al-Sharaie checkpoint.

GaStat said as many as 287,319 government and private employees served the pilgrims this year including 12,615 women representing 4.3 percent.

According to the authority, the number of pilgrims this year represented the fourth place of their number during the past 10 years. The largest number of pilgrims were in the year 1433H (2012) who reached 3.161,573 including 1,408,399 domestic pilgrims.