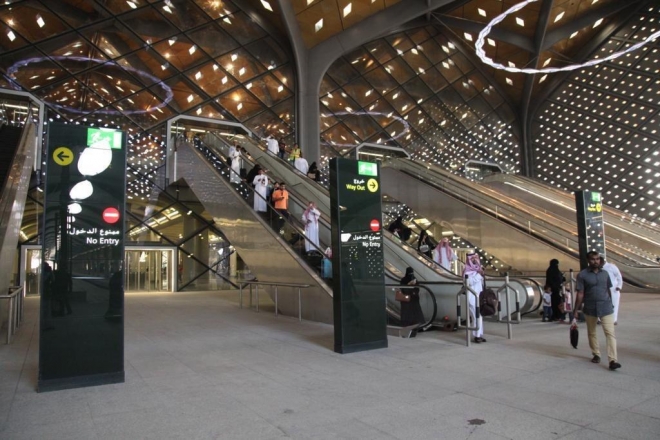 Rumaih Al-Rumaih, chairman of the Public Transport Authority (PTA), said: “It is a moment that marks a historical national turning point in the Kingdom’s modern transportation.”

Al-Rumaih extended his thanks to King Salman and Crown Prince Mohammed bin Salman for their unlimited support.

He also thanked Makkah Gov. Prince Khaled Al-Faisal for playing “a major role in supporting the project and in overcoming obstacles during the implementation phase.”

Al-Rumaih went on to thank Transport Minister Nabeel Al-Amoudi and all other partners for contributing to the successful opening of the largest railway project in the Middle East.

A train traveling in the opposite direction from Makkah to Madinah with stops in Jeddah and KAEC, carrying the same number of passengers, departed at the same time.

Tickets for the Haramain High-Speed Railway can be purchased online (www.hhr.sa), as well as over the phone (920004433) or direct from ticket offices between 8 a.m. and 9 p.m. A discount of 50 percent is currently available.

The Haramain High-Speed Railway project is in line with the objectives of Vision 2030, as it should help increase the number of visitors to the Kingdom’s holy places.

The railway is capable of transporting 60 million passengers onboard a fleet of 35 trains, each one consisting of 417 seats, annually. The trains, which can travel up to 300km per hour, are equipped with the latest technology to ensure comfort and safety.

The Kingdom is boosting its infrastructure spending and expanding its railways — a $22.5 billion metro system is currently under construction in Riyadh — as it seeks to diversify its oil-dependent economy.

The annual Hajj pilgrimage, which will take place in September next year, attracts more than 2 million Muslims to the Makkah region.