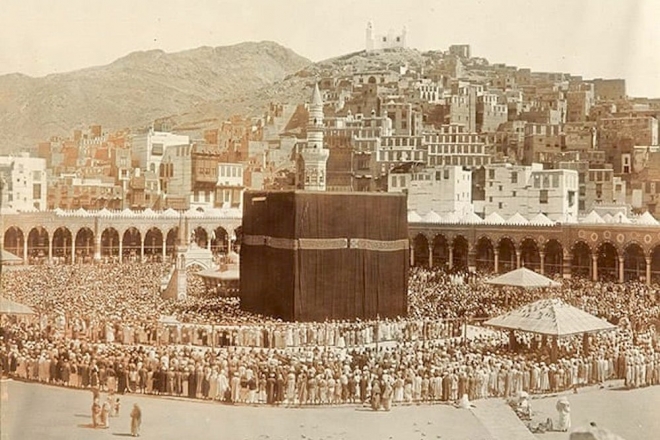 Pilgrims surround the Ka'bah and all face it while some perform the tawaf. Buildings line the hills of the holy mountain Jebel Abu Qubays in the background and up top, the white walls and minaret of the Bilal Mosque can be seen. Have you ever looked around a bustling city and wondered what it was like before all the glass and steel, before all the skyscrapers –  and especially in a city of immense importance like the holy city of Mecca? These archive photographs give us a rare glimpse into the past and show exactly that that! They are a reference to the hajj and life in the holy city of Mecca from over 100 years ago and they were made public on the occasion of a fruitful partnership between the British Library and the Qatar Foundation. The partnership continues to this day and since then, more images have been digitized and preserved for us in the present and for future generations.

Ottoman Turkish troops at their camp in Medina

This picture shows Turkish soldiers going about their quotidian activities, such as cooking and eating. In the background on the right hand side you can see palm groves and permanent buildings.

The city of Medina, the Radiant

This image shows the sanctuary of the Masjid al-Nabawi or Mosque of the Prophet at Medina from above. The buildings in the foreground were made in the regional style: walls constructed from black basalt for the ground floor and mud brick for the top floors, both coated with mud.

This photograph shows pilgrims camping at the Plain of Mount Arafat. The slow shutter speed captures only some people. Most of the pilgrims, both male and female, wear the two-piece dress consisting of two white sheets that are associated with being in the state of ihram.

Pilgrims camp out in tents that are pitched in front of the mosque. You can also see a large number of horses, camels and donkeys, some of which carried women in litters on their long journeys through the Arabian Peninsula.

This image shows the cemetery known as the “Paradise of al-Ma’ala” or “Jannat al-Mualla,” in which several of prophet Muhammad's relatives are buried.

The Ka'bah and sanctuary at Mecca from above

This photograph shows the Ka'bah and sanctuary at Mecca from above and facing east of the Grand Mosque; northwest Mecca can be seen in the background. The movement of the pilgrims is blurry because of the slow shutter speed. The above pictures were first made public in an album called “Views of Mecca and Medina” by HA Mirza & Sons that was printed around the year 1907. They are an important key to understanding local history because they show how both holy cities looked well over a century ago!