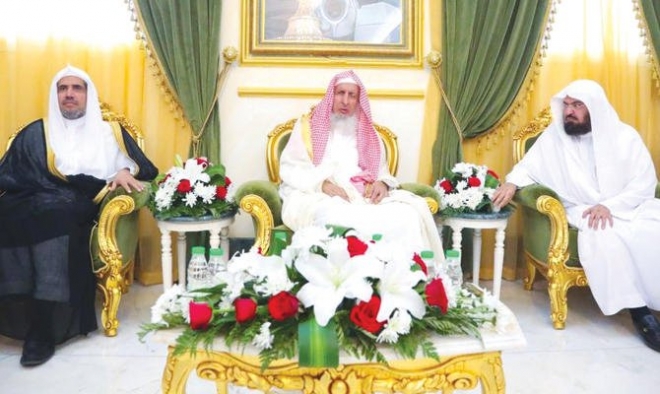 JEDDAH: The Supreme Council of the Muslim World League (MWL) held its 43rd session in Makkah, with senior scholars and ministers from Muslim countries in attendance.

The council expressed solidarity with the Saudi leadership and people, and condemned attempts to target the Kingdom, saying its stability and security are a red line for the Muslim world.

The council praised the Kingdom’s pioneering role in the Muslim world, its religious importance, its history of supporting international security and peace efforts, and its fight against extremism and terrorism.

The great place that the Kingdom occupies in the hearts of Muslims is founded on a sincere and firm belief in its care for Muslim sanctity, the council said, adding that targeting Saudi stability also affects international stability.

The council discussed several matters, including the Palestinian cause, developments in Syria and Yemen, the tragedy of Myanmar’s Rohingya people, the fight against extremist groups such as Al-Qaeda and Daesh, and the importance of promoting dialogue among followers of different religions and cultures.

It also discussed the well-being of Muslim minorities in non-Muslim countries, expressing regret and concern about Islamophobia, and calling for peaceful coexistence.

The council urged Muslims in these countries to fulfil their duty to educate their children, and protect them from deviant ideologies and groups that use religion as a pretext to justify terrorism and extremism.

It also urged Muslims in these countries to use legitimate channels to enjoy their just religious and cultural rights, to contribute to societal development, and to support stability and integration.

The council highlighted the MWL’s efforts and international presence in influential platforms, especially in the West.

Islamophobia is creating serious rifts in multicultural societies and damaging the social contract based on equal citizenship, the council said.

It expressed its full support for the MWL’s programs and activities that highlight the truth about Islam and its values, promote intellectual and religious awareness among Muslim minorities, and spread the values of toleration, moderation and peace.

The council reviewed the MWL’s efforts against radicalization and terrorism, including international collaborative programs, conferences, forums, statements and visits to Muslim and non-Muslim countries.

It noted the MWL’s efforts to promote dialogue among followers of different religions and cultures, including its secretary-general’s meeting with Vatican leaders, the signing of a historic cooperation agreement with the Pontifical Council for Interfaith Dialogue, and organizing an international peace conference at Oxford University.

The council agreed to establish an international center for cultural exchanges, as part of its support for the Conference on Cultural Rapprochement between the US and the Muslim World.

“Only 10 percent of our common principles are sufficient to bring peace and harmony to our world,” said MWL Secretary-General Sheikh Mohammed bin Abdul Karim Al-Issa.