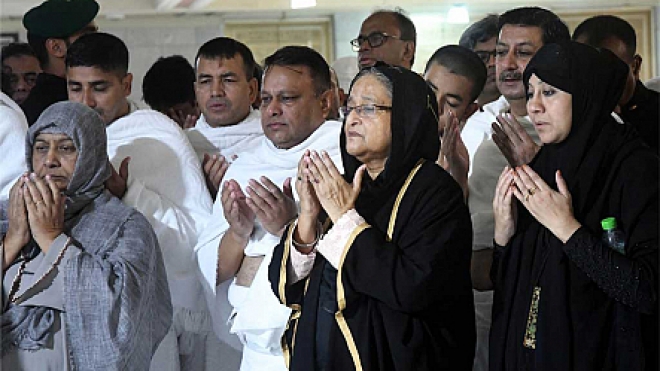 The prime minister, now on an official four-day visit to Saudi Arabia, performed the holy ritual on Thursday.

She first performed “tawaf” around the holy Ka'bah Sharif and later walked and ran between Safa and Marwa, reports UNB.

Foreign Minister AH Mahmood Ali, and others accompanying the prime minister, also performed Umrah.  Earlier, she arrived in Makkah, from Jeddah, by road.

She reached King Abdulaziz International Airport in Jeddah after offering “ziarat” at the Rawza Mubarak of Prophet Hazrat Muhammad at Masjid-e-Nabawi, in Madinah, on Wednesday night.

She also offered Esha prayers at the Masjid-e-Nabawi.

During her stay in Riyadh, she attended meetings with the Saudi King, and Crown Prince and Deputy Prime Minister Muhammad bin Salman bin Abdulaziz Al Saud.

She also met with the Saudi business community, including leaders of the Council of Saudi Chamber (CSC) and Riyadh Chamber of Commerce, in Riyadh.

On her way home

A Biman Bangladesh Airlines fight took off from King Abdul Aziz Airport in Jeddah at 4:5 pm (KSA time) carrying the premier and her entourage members.

The flight is scheduled to land at Hazrat Shahjalal International Airport at around 01.45 am (BST) tonight.

During the visit, the prime minister had an audience with the Saudi King at Royal Palace and joined a lunch hosted by the King in her honour.

The prime minister also held a meeting with leaders of the Council of Saudi Chamber and the Riyadh Chamber of Commerce.

Following the meeting, five memorandums of understanding (MoUs) regarding cooperation in industrial and power sectors were signed between Dhaka and Riyadh.


⇐ Previous:
No Umrah tax waiver for Pakistan yet
Next: ⇒
Adverse weather and rain due to affect many areas in Saudi Arabia