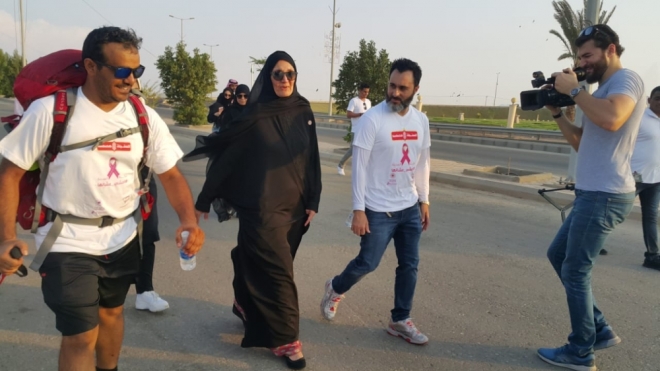 ASFAN — Carrying the slogan “Walk With Her”, Yasser Al-Humaid has begun walking from Makkah to Madinah on Tuesday to enlighten women about the necessity of early examination for breast cancer.

Al-Humaid reached Asfan on Friday and met with members of the community who came to support his initiative.

Following the reception, Al-Humaid continued his journey to Madinah where he is due to arrive on Oct. 27 to highlight the importance of the participation of all community segments in breast cancer awareness efforts, and encourage women to be tested early to reduce the spread of the deadly disease.

The initiative was launched by the Sunbulah Group in collaboration with Zahra Breast Cancer Association to help raise awareness about breast cancer and encourage women to be screened early to reassure themselves about their health. It came as part of the breast cancer campaign, which lasts throughout October every year.

She said the slogan “Walk With Her”, launched by Sunbulah Group, embodies the importance of social responsibility programs and harnessing them in addressing the issues and concerns of society and raising awareness on the importance of combating this disease.

“First of all, I would like to thank Samer Kurdi and traveler Yasser Al-Humaid for this wonderful initiative and we at Zahra Breast Cancer Association are very proud to be part of this initiative. This is a message of hope in life and this disease is feared by many: awareness is important, but early screening is more important.”

From his part, Kurdi said the main aim behind this initiative was not only to enlighten women on how important it was to do an early detection screening for breast cancer but most importantly to be positive in dealing with such a disease.

He said: “This is a call for being positive and how to control what is destined for us. Therefore, we have agreed with the Saudi traveler Yasser Hamaid to spread the message by walking through the Hijrah route, which our Prophet Muhammad (peace be upon him) and his followers took while they migrated from Makkah to Madinah, in order to emphasize the importance of early examination of our sisters, daughters and wives.”

Al-Humaid expressed his pleasure at the warm welcome he received from Princess Haifa, Kurdi and other members of the community. He stressed his determination to continue his journey to Madinah to spread the message.

“Awareness is probably the best method not only for prevention but also for early detection; it really contributes to increasing the rate of recovery. I have insisted to make this trip on foot and I hope to convey this noble message,” he added.

At the end of the big reception held in Asfan, Princess Haifa, Kurdi and other volunteers took part in a short walk with Al-Humaid until he said goodbye to all of them.