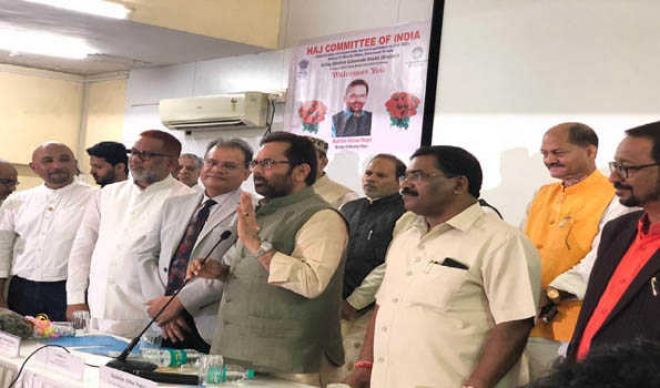 New Delhi/Mumbai, Oct 17 (UNI) Announcing Haj 2019 here at Haj House, Mumbai, Union Minority Affairs Minister Mukhtar Abbas Naqvi said on Wednesday that it was for the first time that preparations for next year’s Haj has been started immediately after completion of the current year’s Haj process(2018). 'Early start of Haj process will ensure better facilities as well as smooth Haj process as the agencies concerned, both in India and Saudi Arabia, will get sufficient time for arrangements,' he said. Mr Naqvi said online application process for Haj 2019 will be started from October 18 while offline application process will start from October 22. A total of 3,55,604 applications had been received for Haj 2018 which included 1,66,387 female applicants. Process of airlines tender will be completed by November and accommodation process in Makkah and Madina will be completed by December-January. The accommodation rates in Saudi Arabia will be same as it was in 2018. All 20 embarkation points will be functional and Haj pilgrims will also be able to go from Calicut airport. Mr Naqvi said Haj 2018 was pro-pilgrims even after removal of Haj subsidy. Elimination of middlemen and 100 per cent online and transparent system ensured that even after removal of Haj subsidy, there was no unnecessary financial burden on pilgrims. In 2017, a total of Rs 1,030 crore was paid to airlines for air fare for 1,24,852 Haj pilgrims. Whereas, in 2018, a total of Rs 973 crore were paid to airlines for 1,28,702 Haj pilgrims, going through Haj Committee of India. It means, Rs 57 crore less was paid to airlines this year even after ending the Haj subsidy. Mr Naqvi said that Haj 2018 was successful. For the first time after the Independence, a record number of 1,75,025 Muslims from India performed Haj this year and that too without any subsidy. 'We are hopeful that Indian Muslims will go in large number for Haj 2019 in comparison to the Haj 2018,' he said. Mr Naqvi said that safety and better facilities, medical facilities for the pilgrims was the priority of the Government and there will be no lackadaisical approach on the matter, according to a statement here. UNI RSA AE 1442