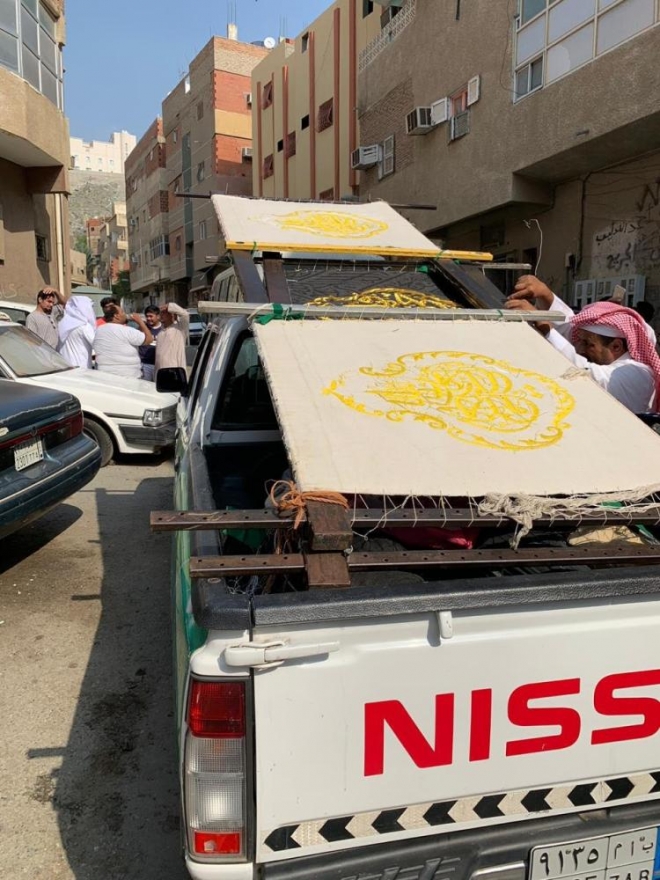 The officials had previously notified the shops about a ban on the sale such items.

Millions of pilgrims who visit Makkah buy souvenirs to take home as gifts to near and dear ones and also to preserve the memory of their visit to the holy city. Making and selling souvenirs to the pilgrims is lucrative business, which is dominated by expatriate workers.

The authorities have lately turned their attention to unauthorized manufacturing of souvenir items representing important religious symbols including the Holy Kaaba.

On Monday, officials from Makkah Municipality, with support from security forces, raided a sewing facility that skillfully produced embroidered cloth that looked like the pieces of the kiswa (the black and gold cover) of the Holy Kaaba.

They arrested 20 expatriate craftsmen of various nationalities from the location. The expatriate workers had turned their residence in Al-Otaibiyah neighborhood of the city into an illegal factory for sewing the fake kiswa and other souvenir items.

The officials, accompanied by police, stormed the building after the municipality was tipped off about the illegal activity by citizens.

The officials also confiscated 18 powered sewing machines, 5 embroidery machines and other equipment along with a huge quantity of cloth, according to a statement issued by the municipality.

During the raid, the officials seized pieces of black silk cloth with Qur’an verses embroidered into them with golden threads to make them look as if they are pieces of the Kaaba kiswa.

Skilled craftsmen from Bangladesh, India and Burma worked in the factory. Apparently, they were trying to make money by selling the cloth pieces to unsuspecting pilgrims, who would be eager to buy them believing them to be pieces of the Kaaba cover. The Holy Kaaba represents the Qibla, or the direction in which Muslims all around the world face when performing the prayer. The cover of the Kaaba is one of the most important symbols of veneration in the House of Allah. Its history is as much a part of the history of the Kaaba itself.

The form and design of the kiswa evolved due to numerous social and economic factors in particular periods of history.

When the kiswa is replaced with a new one as is customary on Dhul Hijjah 9 every year, the old kiswa is cut into pieces and presented to important dignitaries from around the world as souvenirs. One such piece is preserved in the United Nations.