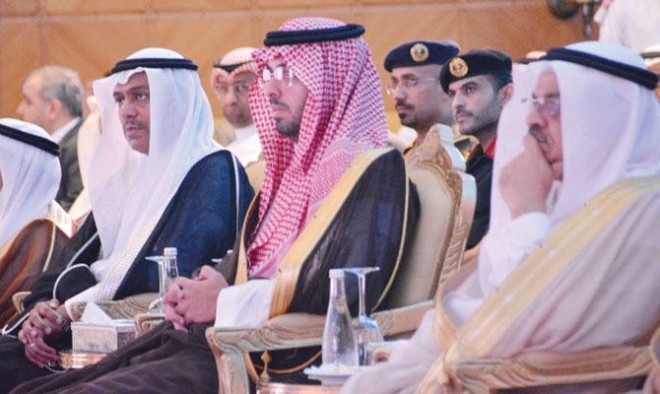 JEDDAH: Under the patronage of the Governor of Jeddah, Prince Mishaal bin Majed, the Hajj and Umrah Ministry organized an explicative forum on Monday for the Jeddah Prize for Creativity 1440H, under the title “Developing our cities for Hajj and Umrah.” The prize comes as part of the third Makkah Cultural Forum, under the slogan “How to set an example.”

The meeting, which was held at the Hilton Hotel, was attended by Deputy Governor of Jeddah Prince Saud bin Abdullah bin Jalawi; Deputy Minister of Hajj and Umrah Dr. Abdul Fattah Mashat; the chairman of the prize advisory committee Dr. Osamah Tayyeb, along with senior officials.

Prince Saud bin Abdullah said all the projects and ideas that the meeting proposed about Hajj and Umrah will be of great importance to the Jeddah governor.

He added that the governorate sought the submission of integrated projects to provide an incorporated industry with a positive impact on the service of pilgrims going to the holy sites through Jeddah.

In his speech, Mashat said Jeddah was the gate to Makkah and the first destination to the holy sites. “Pilgrims feel comfortable when they arrive in Jeddah on their way to the sacred places. Jeddah combines originality, modernity and cultures in a city that is also rich in knowledge.

“A city like this should stick in the memories of pilgrims rather than just being a transit station and this comes in compliance with Vision 2030,” he said.

He added that the model for Hajj and Umrah, which was developed by the prize committee this year, is about the initiatives undertaken by individuals and governmental and nongovernmental entities to improve his ministry’s performance and services targeting pilgrims and Umrah performers.

“This branch of the prize can help generate ideas and initiatives to help us better serve pilgrims in order to ease the process of performing their rituals. The ideas can also help us continually develop our services to meet the pilgrims’ expectations.

“Moreover, they can support us to leave a shining mental image with pilgrims about Saudi Arabia,” he added.

Although the Hajj and Umrah Ministry’s main role is to arrange all Hajj and Umrah works and coordinate with all participating government bodies, the ministry never hesitates to adopt any initiative that can help improve its performance.

“Through such initiatives, we are hopeful that we can enrich the experience of pilgrims to the two holy sites,” Mashat told Arab News.

He added that one of their tasks is to facilitate pilgrims’ entry procedures, and not only to work on the guests of Allah’s comfort but also try to make their visit to Saudi Arabia an unforgettable experience.

Mashat said his ministry’s interest in utilizing digital platforms has added much, not only to the Hajj and Umrah Ministry but also to all ministries and entities serving the pilgrims.

He added that they receive pilgrims as guests to the country who should be offered the best possible generosity and magnanimity.