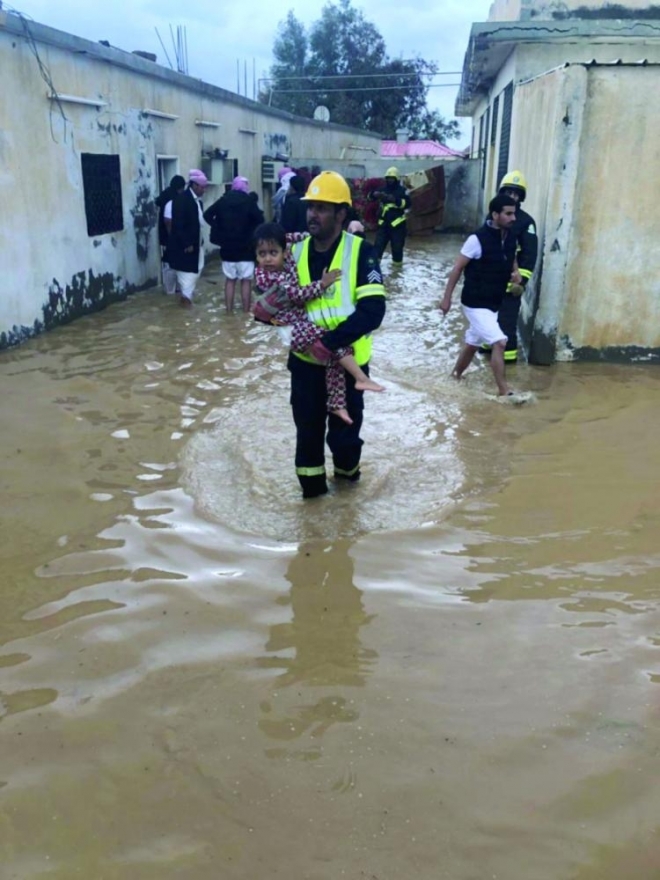 MADINAH — The Civil Defense has said four people were dead and many others trapped in Madinah due to heavy rain.

According to the Civil Defense, the dead included two children who were nine and six years old, a man and a young woman.

It said a number of houses in the east of Madinah were submerged and rescue teams were still searching for people entrapped by water.

The Civil Defense said they received as many as 76 complaints about the damage caused by the rain in Madinah including 25 electric shocks, entrapments and elevator failures.

The spokesman of Civil Defense in Madinah, Col. Khaled Al-Johani, said a number of valleys in the region were flooded because of the rain.

“We are working to remove the debris on the main streets and to dry up water-logged roads and crossings,” he said.

The spokesman said 40 people who were besieged by water in Rabigh were rescued and evacuated to safety.

The spokesman of the Civil Defense in Al-Jouf, Capt. Abdul Rahman Al-Duwaihi, said their teams rescued 23 people in the city, in addition to evacuating three families consisting of 27 members.

He said most of the complaints they received were about submerged houses, roof collapse and some cases of electrocution.

In Makkah, heavy rain uncovered the bad execution of some road projects and the drainage system.

The city council threatened to sue the municipality over this.

The council’s deputy chairman, Fahd Al-Rouqi, said the municipality has failed to award the projects to reliable contractors and asked the National Anti-Corruption Commission (Nazaha) to investigate officials behind the failure of the rain water drainage system.

“The government has spent billions of riyals on these projects which were not perfectly implemented,” he said.

Al-Rouqi said the council would meet on Tuesday with the technical committee to discuss the failure of the projects and to take the necessary steps.

“The contractors should be held accountable and should be brought to justice if necessary,” he added.