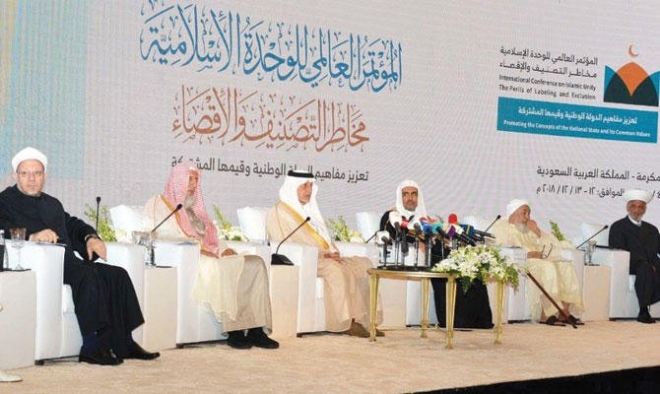 JEDDAH: Scholars attending a conference on Islamic unity, which was held in Makkah on Wednesday, have reiterated that Saudi Arabia is the “heart of Islam” in the modern era. The forum, which tackles sectarianism and the strife plaguing the Muslim world, was attended by prominent thinkers and researchers from 127 countries.

Almost 1,300 scholars and intellectuals took part in the conference, titled “Islamic unity: The perils of labeling and exclusion.”

Makkah Gov. Prince Khaled Al-Faisal inaugurated the event, which was organized by the Muslim World League. During the conference, participants called for a comprehensive plan to address sectarian-inspired extremism.

Abdullah Al-Turki, adviser to the Royal Court, told Arab News that politicians in Tehran continue to create strife in the Muslim world, while scholars around the world warn against such discord.

“Saudi Arabia is home to Makkah and Madinah and hosts millions of Muslims from around the world every day,” he said. “This is why the Muslim World League strives to foster unity by inviting scholars, thinkers and researchers to the table and this is why people of all races are here today.”

“Why does Iran continue to fuel sectarianism?” said Al-Turki.

“This will only fuel vulnerability within already-weak states. If Muslims deviate from scripture, they will continue to suffer.” Egypt’s grand mufti, Shawki Allam, told Arab News that scholars heavily rely on the recommendations put forth by the conference. “Islam calls for us to join ranks and liaise on socioeconomic projects in order to better confront the regional challenges facing our nation today,” he said.

“Egypt continues to support the Kingdom, on which regional stability remains contingent. Terror groups that continue to hijack Islam don’t speak in the name of this nation, and yet, the Prophet’s teachings forbids exclusion.”

Bou Abdullah Gholamallah, president of the Islamic Council, told Arab News that the House of God unites people regardless of race or sect and that unity should be a principle of patriotism. “Cultural, historic and geopolitical variants have played a role in creating division,” he said.

Ali Al-Amin, a Lebanese Shiite scholar, told Arab News that the conference is unique in its nature. “Saudi Arabia has always pioneered unification initiatives,” he said. “Labeling people as ‘believers’ or ‘non-believers’ only contributes to alienating minorities.”

Ahmed Atiyeh, a Yemeni minister responsible for religions endowments, told Arab News that he only wished the conference had existed sooner.

“We are sending a message to the world that we won’t tolerate attempts to reap discord,” said Atiyeh.

“I have come from Yemen to take part and to renounce Iran’s continued meddling in our region.”