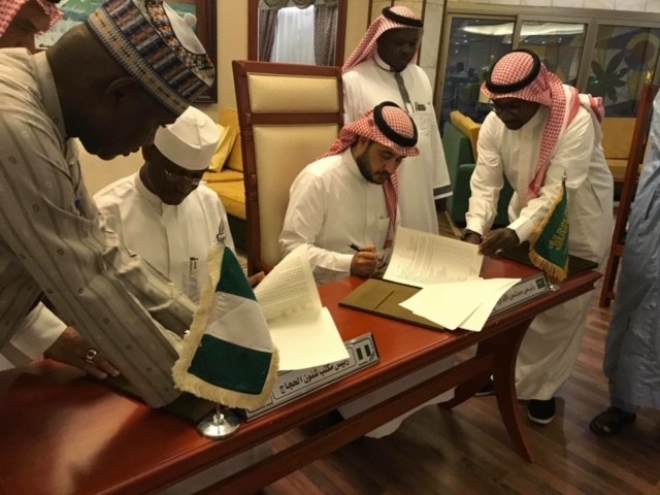 Saudi Arabian authorities have put measures in place to regulate the movement around the Holy Ka’aba (tawaf) during the 2019 pilgrimage (hajj).

The measure, according to the authorities, is to help in crowd control similar to the recent innovation in symbolic stoning of the devil (jamarat).

Hitherto, pilgrims were expected to proceed to the jamarat for the stoning ritual from Musdalifa.

However, following the Mina stampede of 2015 in which thousands of pilgrims lost their lives, the authorities introduced a turn by turn arrangements for pilgrims whereby each country is given a time to carry out their stoning ritual.

Also, pilgrims normally proceed to the Holy Mosque to carry out their tawaf as one of the important rituals during hajj after the stoning ritual.

From 2019, the authorities say they will introduce a timetable for countries to carry out their tawaf.

This was revealed Thursday in Makkah by the establishment in charge of African Non-Arabic Speaking Countries, popularly known as muassassa at a meeting with officials of National Hajj Commission of Nigeria (NAHCON).

Also, according to the spokesperson of (NAHCON), Fatima Usara, authorities of the kingdom also revealed tough penalties await people who overstay in Makkah and their collaborators.

Some Nigerian pilgrims often overstay their hajj or umrah visas.

To this end, NAHCON told the Saudi officials that it has ”laid out plans on this issue and was supported by the establishment pledging to offer the commission all necessary backing in doing so.

”Both sides agreed to introduce collaborative measures that will bring visa/immigration violation to an end, ” she said.

Mrs Usara, in an email to PREMIUM TIMES, said representatives of Nigeria’s Licensed Tour Operators, who’s pilgrims were most culpable in the act, also pledged that their organisation will not tolerate any member trying to soil their name and business.

NAHCON also took advantage of the meeting to demand that Nigerians pilgrims tent at Mashair should have air conditioners instead of desert coolers.

The manager in charge of Jamrat operations under Mu’assasa, Abdallah Lashkuri, assured that the request will be given consideration.

”Relevant papers on terms and conditions were signed legally binding the two sides in a contractual agreement,” she said.

Also, the President of General Car Syndicates, the agency in charge of pilgrims’ transportation throughout Hajj season, Abdulrahman bin Mayouf AlHarbi, responded to allegations that Nigerian pilgrims are being overcharged on transport fares compared to those from other countries.

”He expressed surprise on how this could be possible seeing that the charges are officially determined, government controlled as well as a matter of policy with payment made within financial regulations and transparently, ” Mrs Usara said.

On current contract for pilgrims’ conveyance during 2019 Hajj, the official disclosed that because government had rolled out a comprehensive social safety transport system, henceforth, it mandated all transport companies to provide new buses not more than 10 years old.

”This policy therefore jerked up the cost of transportation, which had remained the same in the past 30 years.

”NAHCON’s Chairman, Barrister Abdullah Mukhtar Muhammad made a plea for this increase to be shelved aside this year due to general economic downturn all over the world.

”Besides, he argued, procurement of these vehicles is a long-term investment whose proceeds should be reaped gradually.

”However, his counterpart in the GCS declared that it is a decision solely under the purview of Ministry of hajj and umrah,” the NAHCON spokesperson said.

She also said the GCS President expressed satisfaction with the commission, proclaiming that NAHCON has been one of the best in the last three years and has remained a role model to other countries.

”Agreements for basic transport services were signed, ” she said.