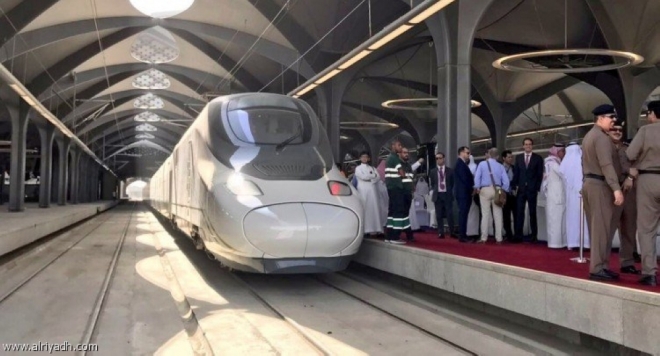 JEDDAH — The Haramain high-speed trains transported more than 118,000 passengers through 310 trips since its launch on Oct. 11, Al-Eqtisadiah newspaper reported on Monday.

Sources told Al-Eqtisadiah newspaper that the railway management was currently studying plans to increase the number of daily trips gradually between the two holy cities. They said the plan was to add two trips every month until the total number of daily trips reached 30 by the end of 2019.

They said if the plan was implemented, there would be a trip every half an hour and the railway would have a capacity to carry 30 million passengers annually, in addition to Haj pilgrims who will be using the train as of the upcoming season.

The sources said the railway project succeeded in achieving the targeted revenue. The management at this stage is not concentrating on generating revenue as much as they concentrate on the quality of the service provided, such as adhering to the schedule.

More than 650 Saudi men and women are employed in the operation of the train stations, the management of the trains and in the maintenance wing.

The total number of workers in various departments and companies involved in the project is 1,200. The 450-kilometer railway has five stations.

It takes an hour and 50 minutes for the trip between Makkah and Madinah and 21 minutes between Jeddah and Makkah.

Passengers can reserve and buy the tickets through a special application and through the smart machines at the train stations.

The stations started renting locations for commercial activity, but the number of coffee shops and restaurants are still limited.

Over 118,000 passengers transported since October


⇐ Previous:
IDF prepares for crossing of 10,000 Palestinians through Jordan to Mecca
Next: ⇒
27 engineering offices to approve fitness of pilgrim accommodation