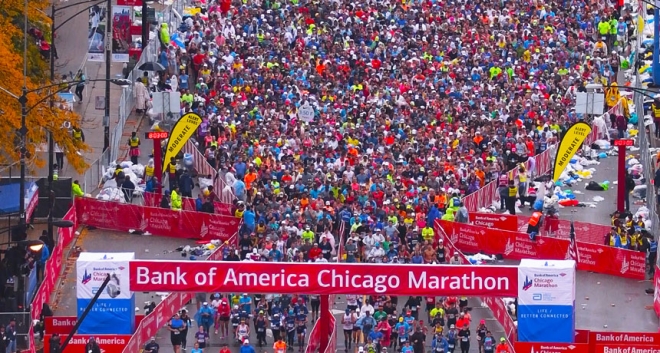 Marathoners queuing up for a big race tend to go with the flow, surging toward the start line like a fluid.

Using footage of runners moving in groups toward the start of the Chicago Marathon, researchers developed a theory that treats the crowd like a liquid to explain its movement. The theory correctly predicted the motion of crowds of runners at marathons in two other locations, physicists report in the Jan. 4 Science.

Previous studies have devised rules for how individuals act within a crowd and used that behavior to describe crowd motion (SN: 1/10/15, p. 15). But to understand how wine swirls in a glass, you don’t need to know the behavior of each molecule. So physicists Nicolas Bain and Denis Bartolo of École Normale Supérieure de Lyon in France considered the crowd as a whole.

At the start of a marathon, runners arrange themselves into groups known as corrals, which individually advance to the starting line. Marathon staff members form a line in front of each corral, periodically holding participants back until there’s space to move forward. The researchers filmed this start-and-stop process at four marathons, including the Chicago Marathon in 2016 and 2017. The movements of the staff set off a change in crowd density and speed that traveled through the throng akin to waves produced when water is pushed, the team found. Similar effects occurred at marathons in Paris and Atlanta in 2017.

Marathon crowds are a special type in that everyone travels in the same direction. Eventually, this type of research could lead to new insight into other crowd formations, including those packed more tightly than marathon crowds, with pedestrians literally shoulder to shoulder. Such crowds sometimes result in deadly stampedes, such as the 2015 event at the hajj in Mecca, Saudi Arabia (SN: 4/7/07, p. 213). Better understanding of these crowd dynamics could help prevent similar tragedies.