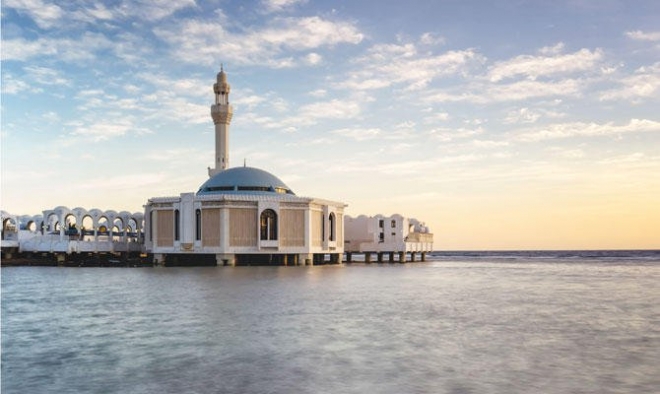 Al-Rahma Mosque was built in 1985 on the edge of Jeddah’s Corniche in Saudi Arabia.

It is also called Fatima Al-Zahra Mosque, and is one of the most visited mosques in Jeddah, especially by Muslims from East Asia.

Covering an area of 2,400 square meters, it receives Hajj and Umrah pilgrims from around the world.

The mosque is a combination of modern and old architecture and Islamic art. It is built with state-of-the-art technology, equipment, and sound and lighting systems.

It consists of 52 outer domes in addition to the main dome — the largest — with eight supporting pillars. There are 23 external umbrellas, beaded on the outside and inside with verses of the Qur’an.

There are 56 windows designed in Islamic style, a high-hanging wooden prayer area for women, washrooms, and comfortable worship rooms.

Worshippers and tourists prefer to visit the mosque at dawn or sunset to enjoy the view of the Red Sea.

It is also known as the Floating Mosque because it is surrounded by the sea ­— during high tide it appears as if it is floating.


⇐ Previous:
No Country For Bearded Young Men: Only 'Well-Groomed' Tajiks Getting Passports
Next: ⇒
Grand Mosque in Makkah swarmed by thousands of black crickets