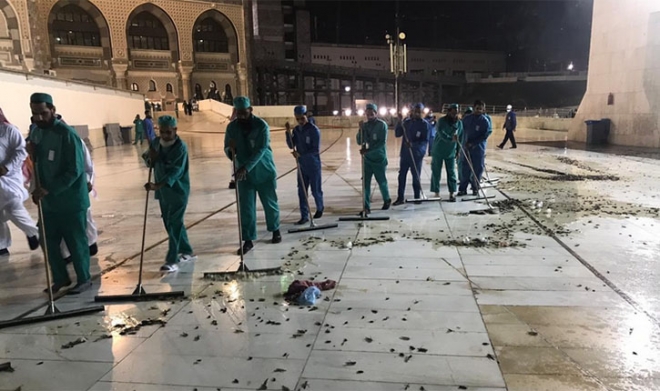 [The municipality later published pictures of the Environmental Protection Team as they sprayed pesticides in the surrounding areas of the Holy Mosque. (Photo: Twitter/@albaid4)]

Makkah: In an unusual and never-before-seen phenomenon, thousands of black crickets on Monday swarmed the Holy Mosque in Makkah and a major parts of the city, forcing some schools to shut down.

Makkah Municipality confirmed the phenomenon, which residents say has never been seen before, and conducted a citywide fumigation process.

“On Saturday night I was praying at the Holy Mosque and the insects were everywhere, the mosque was drawing them in, not only in the yards, but even around the Kabba,” Abdulwhab Soror, 64, told The National.

“I’ve been living in Makkah my whole life, I’ve never witnessed something like this before,” he added.

The phenomenon even baffled insect wildlife experts. Dr Jacky Judas, manager and scientific adviser of terrestrial biodiversity at the WWF and Emirates Nature, said that this was a first.

His best guess was that certain operations in the Arabian Peninsula cultivate crickets for bird feed and it could be that a group has escaped and spread through Makkah. He is working on identifying the species but says they could be related to the True Cricket, or Gryllus campestris.

"It could be an incident where one captive breeding has escaped and spread in big numbers, otherwise maybe there has been specific conditions that favour their development and breeding, but I don't know what that would be," he said.

Cricket swarms have been reported in Peru and West Virginia after intense heatwaves. It is still not clear what has caused the cricket swarm in Makkah.

Regardless of the cause, the municipality has appointed almost 130 people to form teams and begin the clean-up process.

“We are focusing on the areas of reproduction and breeding of insects, sewers, and open water source around the yards of the Holy Mosque and in all toilet scarred in the yards of the mosque,” the statement said.

The municipality later published pictures of the Environmental Protection Team as they sprayed pesticides in the surrounding areas of the Holy Mosque.

For all the latest News, Opinions and Views, downloadummid.com App.