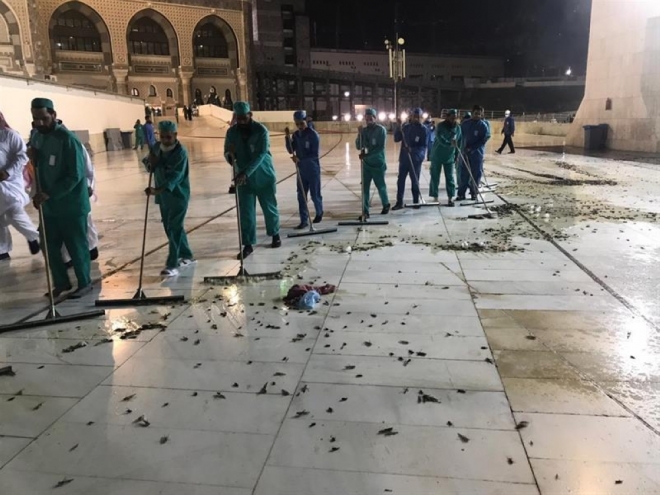 MAKKAH — Specialized teams from the Makkah Municipality visited the Grand Mosque to find out the reasons behind the sudden appearance of large swarms of black grasshoppers and other insects in the holy precincts.

They took samples of the insects to study them and determine the causes behind their sudden appearance.

The specialists were also to determine where they insects had come from so as to quickly annihilate them and prevent their recurrence in the coming period.

Fahd Al-Malki, the official of the Presidency of the Affairs of the Two Holy Mosques who is in charge of the management and cleaning of the carpets of the Grand Mosque, said the insects were greatly annihilated before the Friday prayer.

“The insects did not cause any harm to any worshippers,” he said.

Malki said they did not know a definite source or a certain place where the insects could be wiped out completely.

“They come suddenly to the Grand Mosque between the Isha prayer and the sunrise,” he said, adding that the fight against them in the past few days had greatly decreased their number and their presence in the plazas and the mataf area.

“We are all working together to end the presence of the black grasshoppers inside the Grand Mosque for the welfare of the worshippers, the pilgrims and visitors,” he said.

The presidency had adopted an integrated plan to combat insects and prevent their presence in the Grand Mosque, especially on Fridays.

The presidency has a new piece of equipment named “Caesar Mob” to prevent the spreading of the insects inside the Grand Mosque. It attracts the insects to one spot where they will be sprayed with insecticides.

The presidency said it has about 100 pieces of the equipment, which are being used 24 hours a day through three shifts.

The external and internal plazas in addition to the mataf area are cleaned every day at 7:30 a.m. before the carpets are spread. This is also done at the niche of the imam and the dais, which are cleaned and perfumed on a regular basis.