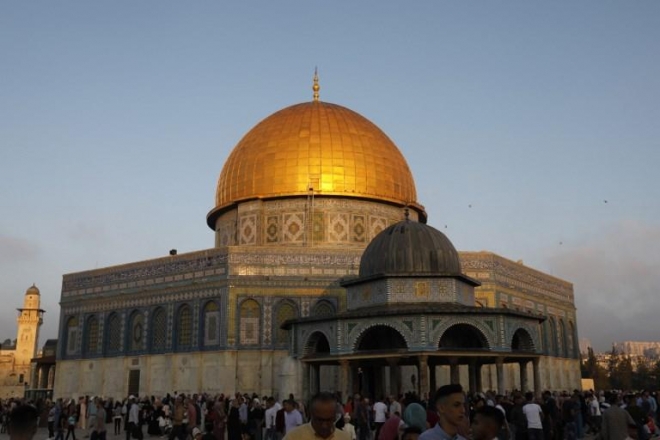 JERUSALEM: Scuffles broke out at the Dome of the Rock in Jerusalem’s Old City on Monday after guards at the mosque refused to allow an Israeli policeman to enter for a routine security check because he was wearing a Jewish skullcap known as a kippah.

Firas Dibs, a spokesman for the Islamic authority that oversees the site, says dozens of worshippers scuffled with police after the guards closed the doors to the mosque and barricaded themselves inside. He says the director of the mosque was lightly wounded.

Israeli police could not immediately be reached for comment.

The gold-domed mosque is part of the Al-Aqsa mosque complex, which Muslims consider their third holiest site after Makkah and Medina. It is the holiest site for Jews, who refer to it as the Temple Mount because it was the location of the biblical temples.

The holy site is at the core of the Israeli-Palestinian conflict, and past clashes there have sparked widespread violence.

Dibs said the police carry out routine security checks every morning, and that the policeman was only prevented from entering because he was wearing a kippah. The Palestinians have long feared that Israel plans to take over the site so it can rebuild the temple, allegations denied by the Israeli government, which says it has no plans to change the status quo.

Earlier on Monday, the Gaza Health Ministry said a 14-year-old Palestinian who was shot by Israeli forces during mass protests along the perimeter fence over the weekend died of his wounds.

The ministry said Abdelraouf Salhah was shot in the head during the protest on Friday. A 43-year-old female activist was also killed, and two dozen Palestinians were wounded.

Hamas has been orchestrating weekly mass protests along the perimeter fence since last March to protest an Israeli and Egyptian blockade imposed on Gaza when the militant group seized power in 2007. At least 187 Palestinians have been killed since the protests began, including 35 who were 18 or younger, and thousands of Palestinians have been wounded. An Israeli soldier was also killed.

Israel says it’s protecting its border from infiltrators who could carry out attacks.