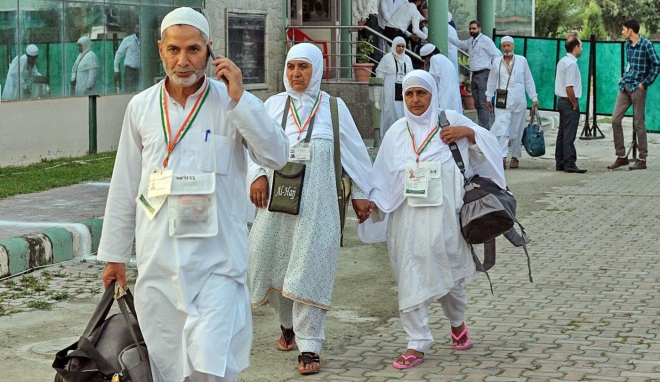 New Delhi: The reduction in Goods and Services Tax (GST) on Haj pilgrimage from 18 percent to 5 percent will ensure savings of Rs 113 crore for Haj pilgrims during 2019, Minister for Minority Affairs Mukhtar Abbas Naqvi said on Wednesday.

The reduction will bring the airfare down for pilgrims embarking from Srinagar by Rs 11,377, he said.

Naqvi said that making the Haj process completely online/digital has helped to make the entire Haj process transparent and pro-pilgrims. The Ministry of Minority Affairs, in cooperation with Saudi Arabia Haj Consulate, Haj Committee of India and other concerned agencies, has completed 2019 Haj preparations 3 months before schedule to make this Haj more comfortable for the pilgrims, he said.

Naqvi said that for the first time after Independence, more than 2,300 Muslim women from India will go on Haj 2019 without Mehram (male companion).

While inaugurating a new office space of Haj Division, Minority Affairs Ministry, at RK Puram in New Delhi, Naqvi said that 2,340 Muslim women from various states of the country have applied to go on Haj 2019 without Mehram.

On the directions of the Prime Minister, the Minority Affairs Ministry has made arrangements to send these women on Haj without lottery system, he said.

The Indian Government had lifted ban on women going to Haj without Mehram last year, which resulted in about 1,300 Indian Muslim women going on Haj 2018 without any male companion. They had been exempted from the lottery system.

Naqvi said that above 2 lakh 67 thousand applications had been received for Haj 2019 out of which 1,64,902 applications were online.
A record number of 1,75,025 Muslims Muslims from India performed Haj in 2018 “that too without any subsidy,” Naqvi said.