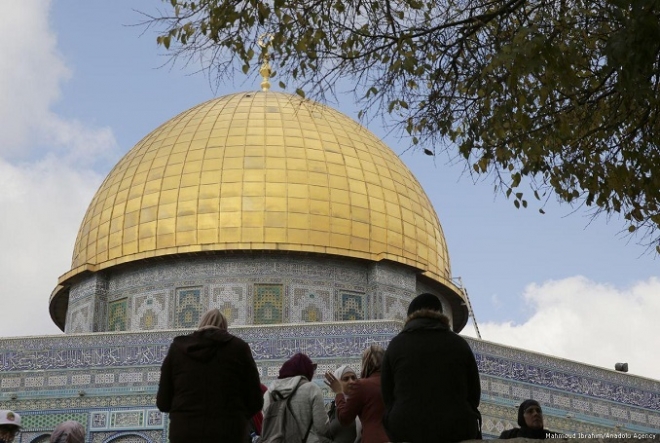 A large number of Jewish settlers and Israeli police stormed the Dome of the Rock inside the Al-Aqsa Mosque compound, in the Old City of Jerusalem, on Thursday afternoon.

Head of the public relations office at the Islamic Endowment Department, Firas al-Dibs, confirmed that 41 Israeli settlers and 85 members of the Israeli police stormed the compound through the Moroccans Gate.

Al-Dibs added Israeli police were heavily deployed across the area.

Al-Dibs pointed out that a number of Israeli police stormed the Dome of the Rock mosque, which is situated inside the Al-Aqsa compound, and several Israeli settlers entered into the women’s prayer space, while Muslim women were performing prayers inside.

The Al-Aqsa Mosque compound, which sits just above the Western Wall plaza, houses both the Dome of the Rock and Al-Aqsa mosque. The third holiest site in Islam, it is also venerated as Judaism’s most holy place, as it sits where Jews believe the First and Second Temples once stood.

Israeli extremist settlers barbarically broke into the Dome of the Rock in the old city of Jerusalem on Thursday morning. For further Palestinain breaking news, kindly join our WhatsApp group on this link:… https://t.co/VzdIvuhNax

While Jewish visitation is permitted to the compound, non-Muslim worship at Al-Aqsa is prohibited according to an agreement signed between Israel and the Jordanian government after Israel’s illegal occupation of East Jerusalem in 1967.

Despite the agreement with Jordan — which is the custodian of Al-Aqsa — Israeli authorities regularly allow Jewish visitors to enter the site, often under armed guard. Such visits are typically made by right-wingers attempting to unsettle the status quo at the site and coincide with restrictions on Palestinian access, including bans on entrance and detentions.


⇐ Previous:
Tourism awards’ spotlight on Makkah
Next: ⇒
Over 50 deaf underprivileged elderly to embark on Umrah for the first time