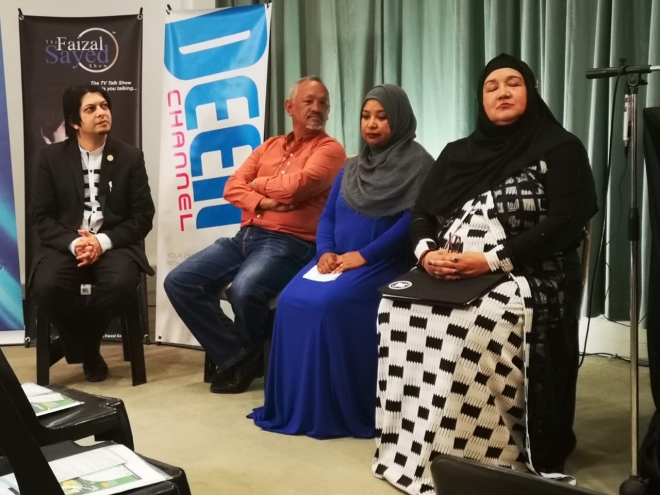 In a historic first for the country, Al-Waagah Islamic Institute for the Deaf (AIIFTD) along with several partners will facilitate 58 underprivileged deaf elderly to go on Umrah for the first-time next month.

In a press briefing on Wednesday, stakeholders described the huge responsibility of the project, noting that 117 people will be boarding the plane to the holy lands of Makkah and Madina. These include volunteers and staff who will ensure a safe and fulfilling journey for the hearing impaired.

While every Muslim yearns to complete their fifth pillar of Islam and relive the journey undertaken by the beloved Prophet Muhammed (PBUH), the iconic calling of the athaan is something most deaf pilgrims will never hear. However, they will have the opportunity of achieving another goal of most Muslims: to lay eyes on the holy Kaaba and feel the energy within the Holy Haram pulsate through them.

Chairperson of Al-Waagah, Cassiem De Wet explained that the project was aimed at raising awareness about the institution and its work. The 14 year old organisation has went through a few name changes over the years but the objective has remained the same. This is to educate and empower the deaf Muslim community in order to take up their rightful place in society and in so doing eliminate the trail of stigmatism.

De Wet added that, despite challenges along the way, the local organization strives to help the deaf community find their Islamic identity.

“We realized what a big job (it was) to educate the young and old deaf of their religion. They had no Islamic identity and this was one of our missions,” said de Wet.

One of the biggest concerns were the logistics of taking such a large group of disabled on a journey of this magnitude. De Wet said a volunteer will monitor three deaf pilgrims to ensure their safety, adding that each will be wearing Al-Waagah branded jackets for people to identify in case of an emergency.

Among several partnering organizations that came on board was the Khidmatul Awaam Pilgrim services. The services Shaykh Imraan Saban noted that the service has previously taken large groups of disabled on Umrah before and will help enable logistical ease.

Saban explained that the vision of the project has resonated with their own and adds that the response from the public has proven how united communities can achieve great things.

“The minute we talk to our suppliers about this opportunity, they all would jump (to) assist. That in itself is a lesson for us that we have neglected this community for many years and within unity we can make anything possible for our brothers and sisters,” said Saban.

The Deen channel’s Faizel Sayed agreed to filming the entire journey. He described how he had, at first, not realized what big a commitment he had made. But after realizing the challenges the deaf face, he said the documentation of the journey will help people understand the community better.

“My role is to cover every aspect of this journey. I feel there is a journey within the journey and that we will not think about it until we see it.”

He hopes to reassure the deaf that they are a part of society.

“The matter that stands out for me is that these people live off a disability grant of R1500 a month. How do you live on that and have an aspiration to go (on this journey). You live a marginalized life in my view, on the outskirts, in silence. I’ve come to realise that they have challenges and we need to support them. To all deaf people: please know that you are not marginalized and we do support you,” said Sayed.

“We are committing that when we come together like this, we can really do wonders as a community. We’ve been speaking to our imams to make our masjids as special needs friendly as possible to make the experience of masjid a good one for everyone, In Shaa Allah,” said Taliep.

Speaker of the Western Cape Provincial Parliament Sharna Fernandez expressed gratitude for being made part of the project. Fernandez said she had been intrigued by the first post by Sayed and that she feels she is now part of the journey.

Fernandez said the documentation of the journey will help remind us to pay more attention to the disabled community.

“When the (documentation) comes back we can take lessons from there and share them with the rest of the world. This journey will give credence to the fact that we need to pay more attention to the deaf, and not only the deaf, but people with disabilities. They too have the human rights that you and I enjoy and often that gets taken for granted.”

The umrah experience will be aired on the Faizal Sayed Show, which broadcasts on Deen Channel and DSTV’s Channel 263.

The group is expected to depart from Cape Town on Saturday 2 February and will return on Friday 18 February.

An official send-off program will take place this coming Sunday 27 January between 10h00 and 12h00 at the International Peace college of SA in Rylands.

The organization has confirmed that funds are still required to cover the cost of food over the two-week period.