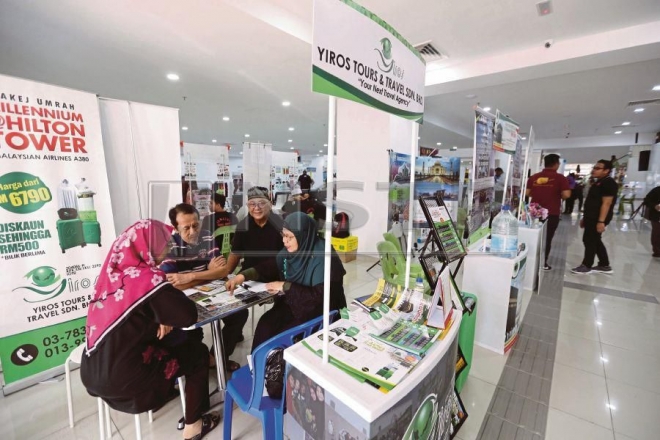 KUALA LUMPUR: MALAYSIANS planning to perform umrah, or mini haj, will soon get to buy packages without having to engage a travel agent.

Online umrah packages will be available from March — a complete airport-to-airport package, which includes visa, transport, hotels, and umrah and “ziarah” tours.

“It will follow the E-Haj format introduced by the Saudi government last year. Just like any online booking, it will be a maximum of nine guests per booking,” a source said.

“Umrah pilgrims under the online package have to share transportation with pilgrims from other countries.  For those going in a big group, they may need the service of travel agents with special umrah licences.”

In December, global online travel agent Agoda and Saudi Arabia’s Hajj and Umrah Ministry signed a memorandum of understanding “to help the kingdom reach its goal of 30 million pilgrims by 2030”.

However, Agoda claimed to be unable to provide full details of umrah products and packages it would offer as it was “in the very early stages of the relationship”.

A check on the site showed only hotels were offered with discounts up to 90 per cent of probably the hotels’ published room rates. Visa application and transport services are not available.

Checks on Saudi Arabia’s official websites — www.haj.gov.sa and https://eservices.haj.gov.sa — showed no further information on how to apply for E-Umrah, but instead listed approved travel agents for every country. However, there was a discussion on e-visa for umrah on TripAdvisor’s Saudi Arabia Message Board, which talked about two successful e-visa applications.

“The E-Umrah service will be available soon.  However, there are agents that have started offering their versions of E-Umrah even though theirs are not as complete as the one planned by the Saudi government,” the source said.

Currently, visas for umrah can be applied only through travel agents with special umrah licences. The RM90 umrah visa fee is included in the umrah package offered by the companies.

There have been stories of individuals going without the service of travel agents by managing everything on their own. But since visas can be obtained only via approved travel agents, these individuals had no choice but to get their visas from these agents at a hefty fee.

Travel agents caught “selling” only umrah visas would have their licence revoked or worse, lose their RM150,000 bond. But the pilgrims would walk free.

Two years ago, then deputy tourism and culture minister Datuk Mas Ermieyati Samsudin said the Saudi government had made it compulsory for pilgrims to be registered with and managed by legitimate umrah operating companies.

“Tourists who are categorised as free independent travellers are not considered umrah pilgrims. They can be arrested by the Saudi authorities because DIY umrah is illegal there.”

Asked if the new development was good news for pilgrims, the source said: “Possibly yes, but we have to see the package. DIY packages might be cheaper but not all the time.

“Like any online service, you must know when and what to choose.  But, there is no one to advise or consult at the time you commit to your reservation.

“Travel agents can help but they will charge a service fee.”

He said it would be a big challenge for umrah agents to compete with the E-Umrah.

“There is nothing we can do. We will need to wait for more details from Agoda. The Tourism, Arts and Culture Ministry is aware of this development.”

However, another travel operator was confident that the country’s travel associations, especially the Malaysian Association of Tour and Travel Agents (Matta) and Bumiputera Tourism Operators Association of Malaysia (Bumitra), would not take this lying down since their members had spent a lot on licensing.

“In fact, some agencies have made umrah packages their core business.”