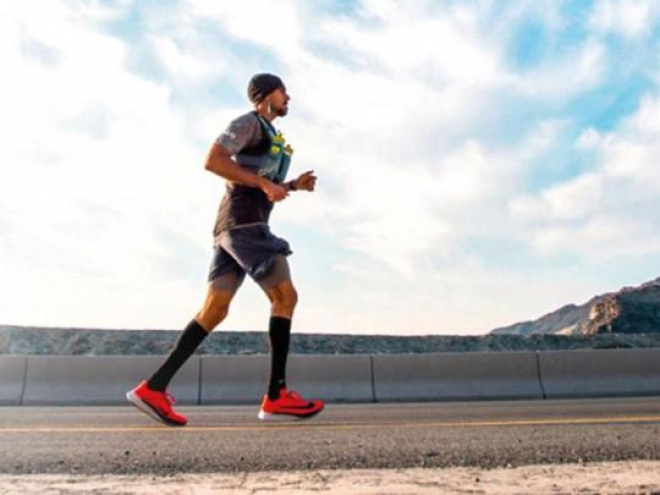 Abu Dhabi: Come Friday, an Abu Dhabi resident will start an unprecedented challenge of running from the Shaikh Zayed Grand Mosque in Abu Dhabi to the Holy City of Makkah in Saudi Arabia,

Dr Khalid Jamal Al Suwaidi, executive director of the Emirates Centre for Strategic Studies and Research (ECSSR), said at a media briefing on Monday that he will run for more than 2,000km to send a strong message to the world about the brotherly relations between both countries while motivating residents to shed their sedentary lifestyles and hit the road in order to stay physically and mentally strong.

He is determined to accomplish the journey by running non-stop for 38 days. “My intention is to express the appreciation of the people of the UAE for the historical Emirati-Saudi relations, and the cooperation between the two countries in facing the challenges that threaten the region. Leaders of both countries are aware of the need for collaboration and solidarity at this period of time in order to ensure security, peace and stability in the region,” Dr Al Suwaidi said.

He also invited other enthusiasts to join him in the run. However, he did not give the details of the route he will be taking, citing security reasons.

He said he is inspired by his father, Professor Jamal Sanad Al Suwaidi, director general of the ECSSR, who fought a long battle with cancer and won. “It sets an example of determination and resolve and proves that nothing is impossible in the face of a strong will,” said the executive director who completed his doctorate from Kings College London on the subject of ‘National Identity in the UAE’.

“I have been training rigorously from February last year and have covered 10,000km. The training was to make me physically, psychologically, mentally prepared to take up the big challenge,” he said.

A team of six people including a doctor will keep a tab on the health conditions of Dr Al Suwaidi throughout the journey. “All fatigue and pain will end the moment I see the Holy Kaaba and perform Umrah,” he said.

This is not the first time Dr Al Suwaidi has taken up an extraordinary challenge. In February last year, he ran 327km from Fujairah to Abu Dhabi in 80 hours during which he did not sleep for more than three hours to raise awareness about the Cancer Patient Care Society — Rahma.

Dr Al Suwaidi used to be obese until 2015 and was on the verge of getting diabetes, but he transformed himself by hitting the road and gymming regularly.