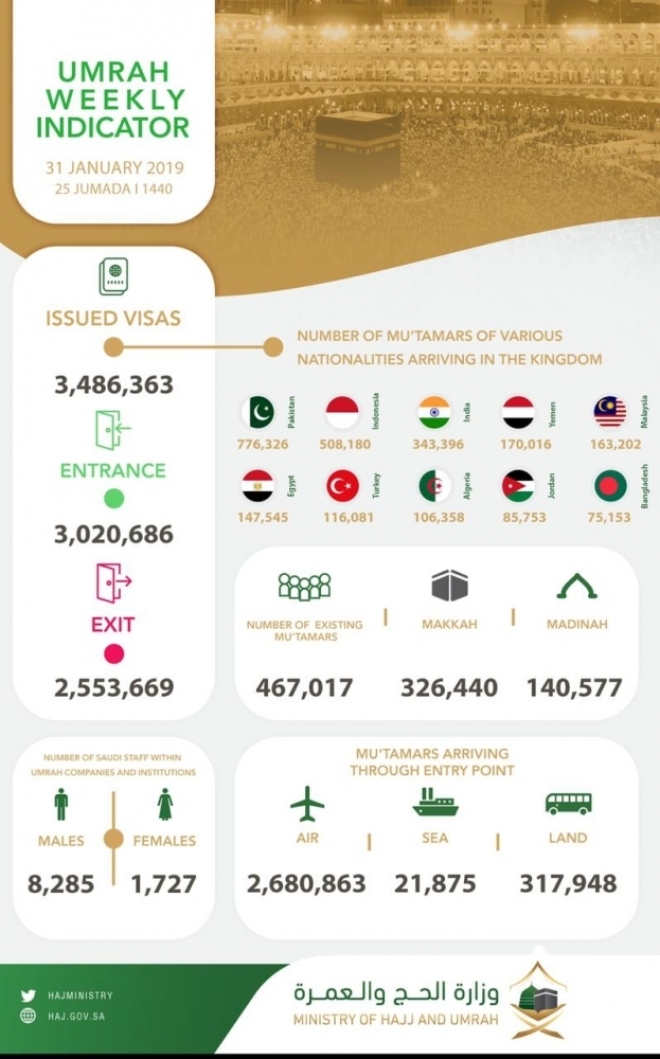 RIYADH — Since the start of the current season, Saudi Arabia has issued nearly 3.5 million visas for Umrah pilgrims while over 3 million of them have arrived in the country to perform the rites as of Thursday, Jan. 31.

In its Umrah weekly indicator released on Thursday, the Ministry of Haj and Umrah said 3,486,363 visas were issued to the pilgrims until Jan. 31, and 3,020,686 pilgrims arrived in the Kingdom.

It said 2,553,669 people left the Kingdom after completing the rites of the minor pilgrimage in Makkah and paying at the Prophet’s Mosque in Madinah.

The data also included the number of Saudis serving in Umrah companies and institutions. It put their number at 10,012, including 8,285 males and 1,727 females.

The weekly indicator was launched at the beginning of this Hijri year to enable the authorities to track the number of pilgrims coming into the Kingdom, and in turn, enrich their experiences by providing high-quality services.

The initiative was among the main objectives of Saudi Vision 2030, which aspires to facilitate Umrah travel for over 30 million Muslims annually by 2030 and provide them with excellent services.

The Ministry of Haj and Umrah on Friday launched a bouquet of online services for Umrah pilgrims, the Saudi Press Agency (SPA) reported.

The program will enable Umrah applicants from all over the world to request reservation of related services online through a new platform called Maqam, SPA said.

By logging on to the portal at https://eservices.haj.gov.sa/eservices3/pages/home.xhtml?dswid=-2981 prospective pilgrims can book suitable Umrah packages, confirm their reservations and check the status of their visas.

The move falls in line with the ministry’s strategic transformation into digitization of services by introducing a host of platforms to downsize and simplify the procedures for Umrah performers.

The service available in as many as 157 countries is particularly helpful for pilgrims who cannot find external agents to organize Umrah travel. — SG/SPA