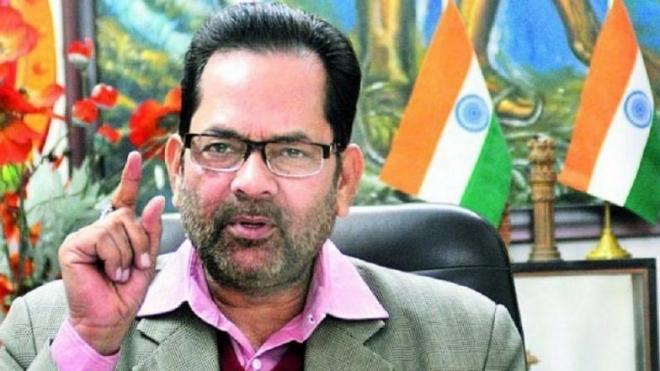 Mumbai, February 9: Union Minister for Minority Affairs Mukhtar Abbas Naqvi on Saturday said that digitalising Haj-related processes ensured that the annual pilgrimage remained inexpensive, despite the removal of Haj subsidy and thus made the entire system pro-pilgrim. While inaugurating a two-day training camp of 'Khadim-Ul-Hujjaj' (those who assist the pilgrims during the Haj) here, Naqvi said that making the process online ensured transparency, resulting in no additional unnecessary financial burden on Haj pilgrims.

Naqvi said that for the first time after independence, a record number of 1,75,025 Muslims from India performed Haj in 2018 and without any subsidy. Of these, 48 per cent were women who undertook the annual pilgrimage. The Union Minister stated that 2,340 Muslim women from India will perform the Haj this year without 'mehram' (male companion). Hajj 2019 to Cost Less? Mukhtar Abbas Naqvi Announces 100% Subsidy Free, Online Application Procedure From October 18 To November 17.

"Under the directions of Prime Minister Narendra Modi, the Minority Affairs Ministry has made arrangements to send these women on Haj without any lottery system," Naqvi said. "For the first time, the Modi government had lifted the ban on women going to Haj without 'mehram' last year, which resulted into about 1,300 Muslim women going on Haj in 2018 without any male companion. They had been exempted from the lottery system," he added.

Naqvi underlined that due to transparency and digitalisation of Haj-related processes, airfares for Haj pilgrimage have reduced significantly. In 2018, even after the removal of Haj subsidy, pilgrims saved about Rs 57 crore in airfares, he informed. The union minister further noted that GST on Haj pilgrimage reduced from 18 per cent to 5 per cent this year by the Centre, which will ensure that about Rs 113 crore will be saved by the pilgrims during this year's pilgrimage.

Airfare from Srinagar will be reduced by Rs 11,377, while from Ahmedabad Rs 7,305 will be saved.Naqvi said that air fares from Aurangabad will be reduced by Rs 9,373, from Delhi by Rs 7,967, from Gaya by Rs 11,027, from Guwahati by Rs 13,049, from Ranchi by Rs 11,946, from Kolkata by Rs 9,787 and from Hydebarad by Rs 7,204 this year.He underlined that the Ministry of Minority Affairs, in cooperation with Saudi Arabia Haj Consulate, Haj Committee of India and other concerned agencies, had started this year's Haj preparations three months in advance for ensuring hassle-free travel for the pilgrims.In the training camp, a total of 538 'Khadim-ul-Hujjaj', including 13 females from all states participated.