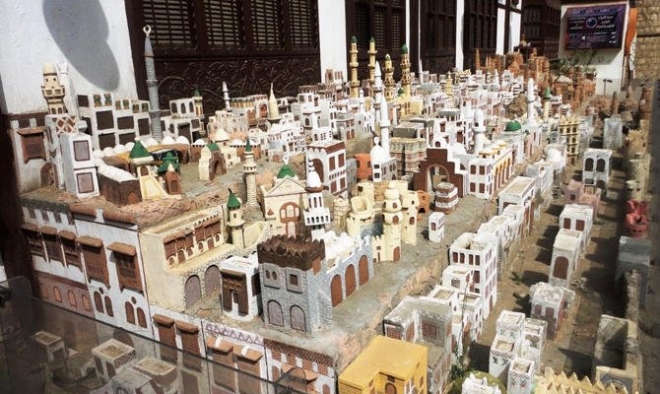 JEDDAH: The amazing architecture of the Abdul Raouf Khalil Museum takes us on an astonishing journey back to the Jeddah of the old days where wooden carvings dominated most of the urban architecture, especially doors and windows.

The museum will open its doors to visitors of the Jeddah Global Village, Saudi Arabia’s first multicultural festival, from March 25 until April 24.

The village, which will be organized at nearby Al-Tayebat International City, in Al-Faisaliah, is expected to attract over a million visitors.

The museum includes a Saudi Arabian heritage section, an Islamic heritage pavilion, an international heritage area and a public heritage exhibition as part of the festival, featuring a host of priceless historical artifacts.

“Some of the items here date back millions of years,” a museum official told Arab News.

Suzan Eskander, the director general of the company organizing the event, International Image, said: “Participants from some 50 countries are adding finishing touches to their pavilions as I speak.

“There will be pavilions for representatives from five Gulf Cooperation Council states, 10 Arab countries, as well as 18 countries from Africa, 10 from Europe and four countries from Central and South America.”

She added that national folk dances would be performed by troupes from each participating nation.

“Performers will be dressed in traditional costumes. Visitors can also enjoy dishes and traditional products from each of the different countries.”

Eskander confirmed that paintings and other artworks, portraying and representing the heritage and cultural history from the different countries, would be on display. She expressed her gratitude to the General Entertainment Authority (GEA) for their continued support and cooperation to make the village a reality.