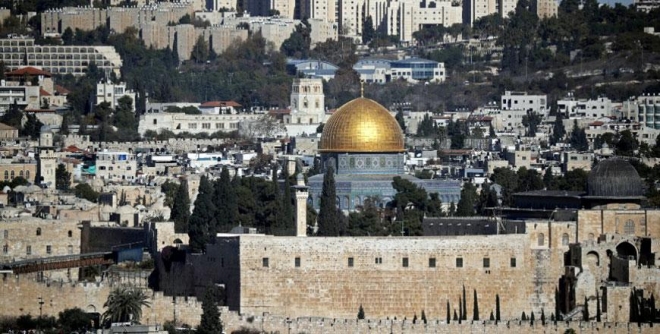 A general view of Occupied Jerusalem shows the Dome of the Rock Mosque (centre), on December 4, 2017. Jordanian institutions and organisations responded to His Majesty King Abdullah’s recent decision to cancel his Romanian visit after Romania’s prime minister suggested her country move their embassy to Occupied Jerusalem (AFP file photo)

AMMAN — Following His Majesty King Abdullah’s decision to cancel a visit to Romania in solidarity with Jerusalem, political analysts and commentators weighed in on what they considered to be of significant importance on Jordan’s ties with countries supporting Israel, particularly Romania.

On Sunday, Romanian Prime Minister Viorica Dancila announced that her country is going to move their embassy to the occupied city of Jerusalem.

The next day the King cancelled an official visit to Romania, in response to Dancila’s statements, stirring a diplomatic and political storm in Jordan and beyond.

“This far surpasses a mere response to Romania... it sends a message to Europe, the US, Israel and Arab countries, too, of the King’s unwavering position on Jerusalem and [the occupied city’s] holy sites,” Editor-in-Chief of Al Rai Rakan Saaydeh said in his column.

Just a week before, during a visit to Zarqa, His Majesty said that he is coming under pressure to forego Jordan’s historic role as custodian of Jerusalem’s holy sites. He also reaffirmed that his position will not change.

“To me, Jerusalem is a red line, and all my people are with me,” the King said.

Remarking on what is to come, Saaydeh said that “political repercussions will follow”.

“After this loaded decision, I urge the government to look into our trade relationship with Romania, especially when it comes to the importation of living sheep, mutton and beef,” wrote Ibraheem Qaisi, a columnist and political commentator.

He added that “the King’s decision should be put into action, a serious course of action, saying ‘no’ [in bold] to anyone who supports transgressions on others’ rights”.

One of the first concrete actions aligning with His Majesty’s decision was that of the Jordan Chamber of Commerce, which cancelled a Jordanian-Romanian business forum and other upcoming meetings in Bucharest.

In his daily column, Fahd Khitan wrote: “When it comes to Jerusalem, the King does not bother looking at economic or trade relations. It truly is, as he said, ‘a red line’.”

Musa Shteiwi, the director of the Centre for Strategic Studies at the University of Jordan told The Jordan Times on Tuesday that the King’s decision sent a “clear message, particularly to the European Union, who were mostly against the move of the embassy, to start taking similar steps”.

Aside from that, he added, the visit’s cancellation will ripple through Romanian halls of power and diplomatic channels, and will have a substantial effect on the relocation decision. So much so that Romania “will not follow through” with its declarations, he thinks.

Romania’s president, minutes after his prime minister’s remarks, issued a statement on Sunday calling her “ignorant”, before finally stating that “the final decision” rests with him.

“When we speak of Romania, the decision was surely a firm one, because there was a need to urge countries, whose stance is undecided on the movement of embassies to Jerusalem, not to do so. However, when it comes to the US and other countries, who are clearly pro-Israel and yet hold strong relations with Jordan, the approach is different,” Waleed Oweimer, a professor of international relations at Mutah University, explained to The Jordan Times.

“Jordan’s foreign policy is indeed strong when it needs to be, but it is also realistic. If the country’s close relations with the US and other pro-Israel countries are destroyed over this, then there will definitely be serious damage on both sides, which is why the King approaches each country differently and voices his opinions through all the available diplomatic channels,” he concluded.