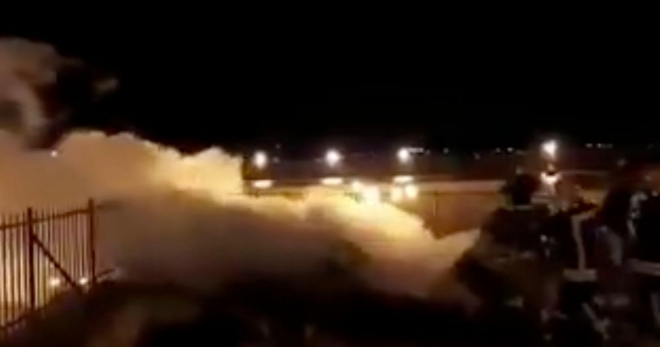 A fire broke out at the Al-Aqsa mosque compound in Jerusalem - at the same time as the devastating Notre Dame fire.

Footage shared on Twitter shows smokes and flames emerging from the roof of a guard booth on the rooftop of the Marwani prayer room, according to the Palestine News Agency.

Firefighters can be seen putting out the flames using fire extinguishers at an open area.

The fire did not cause any injury or damage to the structures of the mosque, said Waqf official Bassem Abu Labda.

"We only lost a mobile guard booth that guards would sit in when it rains. We did not lose anything important," he added.

Police are investigating the cause of the fire but there are information suggested that it may have been caused by children playing around and setting the fire.

The Al-Aqsa, known to the Jews as the Temple Mount, is Islam's third holiest site and central to the ongoing Arab-Israeli conflict.

The incident, however, was overshadowed by the much serious blaze in the Notre Dame Cathedral at the same time.

Palestinian President Mahmoud Abbas reportedly condemned the fire at Al-Aqsa as he said represents 'great religious and humanitarian value to us', according to Wafa.

He also expressed deep sorrow in the fire that broke out in Notre Dame Cathedral as he stressed his 'solidarity and sympathy with France and its friendly people for this incident that is painful to all of us because of what this historic place means to civilisation, to the history of France and to world heritage'.