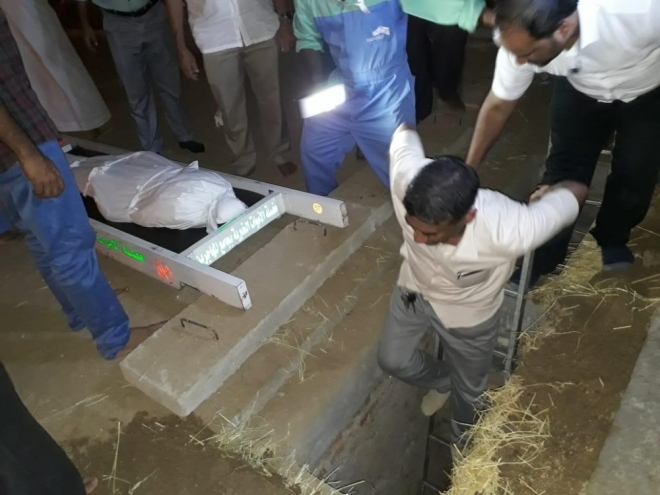 JEDDAH — Millions of faithful from around the globe visit the holy city of Makkah every year. A significant number of these people are elderly and sick people who come to fulfill their lifetime dream of visiting the birthplace of Islam.

Some of them die in the holy city unable to bear the travails of the harrowing trip at an advanced age or due to natural causes.

In most cases when a pilgrim dies in the holy city, family members accompanying them wish their relative to be buried in the holy land. However, most of them are not aware of the procedures and services that are available for burying a dead pilgrim.

Grief-stricken family members run from pillar to post to complete the last rites of their loved ones and this is where K. Abdul Mujeeb, a humanitarian worker from the Indian state of Kerala, plays a crucial role.

Mujeeb, hailing from the Muslim-majority Malappuram district of Kerala, has been living in Makkah for about three decades. He is busy most of his free time visiting the sick and burying the dead. The 49-year-old can be spotted quite often at Al-Noor Specialist Hospital, the largest medical facility in the holy city with a large number of beds and a spacious mortuary.

Mujeeb claims that he helped bury at least 2,000 dead pilgrims during the three decades he had spent in Makkah. Visiting mortuaries and graveyards has become part of his routine. He also pays regular visits to the sick admitted to various hospitals in the holy city.

Starting from hospital, Mujeeb helps complete all formalities with the police, other local authorities and foreign missions. He also helps wash the body and take it to the funeral prayer and then to the graveyard for burial. He does all these services free of charge and only seeking his reward from Allah Almighty.

Speaking to Saudi Gazette, Mujeeb said he never heard any family members asking to repatriate the bodies of their dead relatives back home to be buried in their countries. Instead, they all want their died ones to be buried in holy land.

Recalling his first experience that prompted him to plunge in this social service, Mujeeb said, “It was in 1990s when I saw the pain of an elderly pilgrim who fell down in the street in Misfalah district. I took him to hospital for treatment. While in the hospital, I saw a woman desperately seeking help to bury her dead husband. I helped the woman and buried her husband with the help of the concerned authorities.”

When asked about the most tragic case that he had encountered in his three decades of serving the dead, Mujeeb said he could not forget the fatal accident involving an Indian school bus on its way from Makkah to Jeddah in 2004 in which seven students and a teacher were killed.

Tears rolled down his cheek when he recalled the scene where all eight bodies were kept in an auditorium in Makkah for their friends and relatives to see them for the last time.

Praising the Saudi authorities for their prompt action and humanitarian support to people in distress, Mujeeb revealed the Civil Defense forces deployed a helicopter to airlift the dead body of a pilgrim sho died on Jabal Noor in 2004. The pilgrim, who came from Dubai, died on the spot due to a lightning strike during a thunderstorm.

“The helicopter was not able to land or pick the body using equipment due to heavy storm. With the help of some others, I carried the body down from top of the steep mountain on our shoulders,” Mujeeb said.

Mujeeb also recollected the tragic incident of a 23-year-old Indian house driver named Anas, who was brutally murdered by the son of his employer for not allowing him to drive in Makkah. The boy pumped three bullets straight into the chest of Anas, who was only obeying the instructions of his employer.