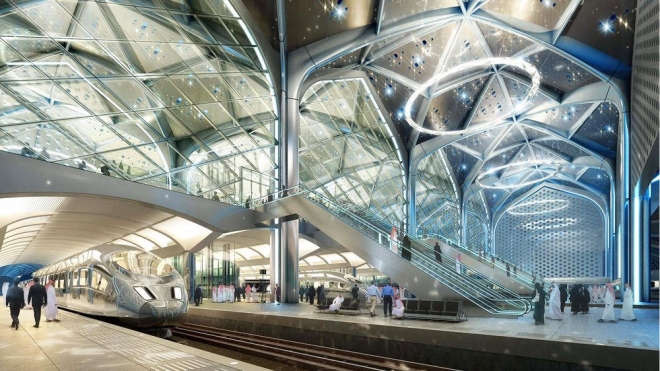 RIYADH: The Haramain High-Speed Railway linking Makkah and Madinah, and its strategic role in developing the Saudi transport industry was discussed during the monthly meeting of the Public Transport Authority at its headquarters in Riyadh.

Rayan Al-Harbi, the director general of operations and maintenance for the railway, which began operating a little over six months ago, discussed the main features of the megaproject, which is the largest of its kind in the region and the sixth-largest in the world, and how it helps to promote the transport industry in the Kingdom.

He also talked about the strategic locations chosen for the five stations served by the railway, in Makkah, Madinah, Jeddah, King Abdul Aziz International Airport and King Abdullah Economic City in Rabigh. The Jeddah station is the biggest of its kind in the world, which gives the project additional value through the state-of-the-art services it provides to travelers.

Al-Harbi praised the use of technology in the railway’s operational processes and electronic services, including online reservations. The huge national project relies on a highly qualified national workforce, and many important jobs have been Saudized, he noted, from work teams and leaders to maintenance and operations staff.

He said the project is one of the largest rapid-transport projects in the world in terms of infrastructure. It includes six giant power generators and a large number of bridges that are specially designed to be safe and secure in case of sand drift or floods.

More than 700 trips have been completed and more than 300,000 passengers have traveled on the Haramain railway since it was officially opened by King Salman in Sep. 2018. It is expected to carry up to 60 million passengers a year.