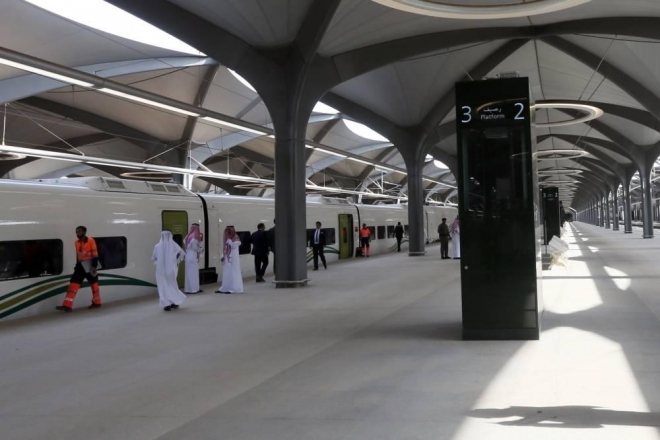 JEDDAH — The Haramain High Speed Railway will operate 10 daily trips between Makkah, Madinah and Jeddah during the holy month of Ramadan, the Saudi Railway Company (SAR) has announced.

The train is currently operating eight daily trips, which will be increased to 10 with advent of the fasting month.

The company said the trips would be increased according to the intensity of the traffic and demand from passengers.

The management has made plans to increase the daily trips to 30 by the end of the current year, Al-Watan newspaper quoted SAR officials as saying.

The management expects a high jump in bookings during Ramadan especially for the trips heading to Makkah or Madinah from Jeddah.

It also said there would be a large number of ticket reservations by visitors going to Madinah to pay homage to the Prophet Muhammad (peace be upon him) and pray at his mosque.

“Ramadan is a test for the ability of the train to accommodate the growing number of passengers who head to Makkah or Madinah,” the SAR statement said.

It said more than 500 qualified Saudi employees were recruited to work in the department of operations and control.

“More Saudi cadres will be employed when the number of daily trips reaches 30 by the yearend,” it added.

The management said passengers coming from outside would not be allowed to take their luggage along with them on board the train but would be transported to their destinations by Saudi Post.

There are four main stations for the train at present but the SAR said a fifth station would be added when the new King Abdulaziz International Airport in Jeddah becomes fully operational.

The company said last month a free Internet service was introduced in all compartments for the passengers.

The train, which started operations in October, has so far transported more than 118,000 passengers.