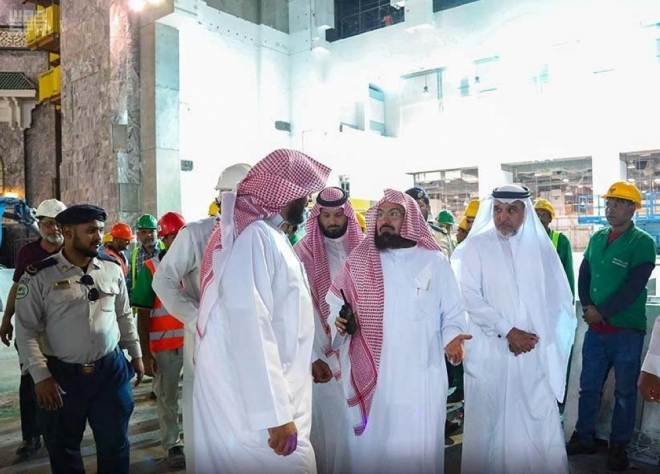 MAKKAH – The Grand Mosque in Makkah and the Prophet’s Mosque in Madinah are fully geared to welcome millions of worshippers during the fasting month of Ramadan, which is only four days away.

The Presidency for the Affairs of the Two Holy Mosques have unprecedented arrangements to welcomes the guests of Allah this year.

The emirates, mayoralties, police, traffic department, the Civil Defense and many other departments and agencies have swung into action to offer the best possible facilities and services to the pilgrims and visitors to the holy cities during Ramadan, which marks the peak of the annual Umrah season.

Sheikh Abdurahman Al-Sudais, head of the Presidency, said that the presidency, the emirate and other concerned departments and agencies carried out several campaigns to give finishing touches to their operation plans for the holy month. He said the presidency approved its Ramadan plan in eight pivotal areas such as service, administration, finance, media, public relations, guidance, as well as scientific, intellectual and engineering fields.

Sheikh Sudais discussed with imams and khateebs of the Grand Mosque about the minute aspects of implementing the Ramadan plan. He also finalized the schedule of imams who will lead the obligatory, taraweeh and night prayers during the holy month.

While making an inspection tour of the work site at King Abdulaziz Gate on Monday evening, Sheikh Sudais ordered the opening of the gate, which is the main entrance to the Grand Mosque, for Umrah pilgrims and worshippers before the start of the holy month. Directives have also been issued to officials and departments to finish the ongoing construction and maintenance work at the Haram quickly.

The Civil Defense authorities have made all preparations and arrangements to ensure the safety of pilgrims and worshippers who are expected to throng the two holy mosques in large numbers during Ramadan.

Minister of Interior Prince Abdul Aziz Bin Saud Bin Naif has approved the general plan for the movement of the Civil Defense in emergency situations during the holy month.

The agency of the Haram Presidency in Madinah mobilized more than 5,000 employees and cleaning workers in the Prophet›s Mosque as part of the Ramadan preparations. The agency has spread out 16,000 prayer rugs inside the mosque, its roof and courtyards.

The department for cleaning and rugs at the agency replaced the prayer rugs with new ones.

Sheikh Muhammad Al-Khudairy, head of the agency, said each prayer rug can to hold three rows of worshipers and is fitted with radio-frequency identification (FID), consisting of all relevant data.


⇐ Previous:
Karam for Umrah Services launches its operations with more than 10 agreements
Next: ⇒
8 years on, a 500-meter bridge in Makkah remains incomplete