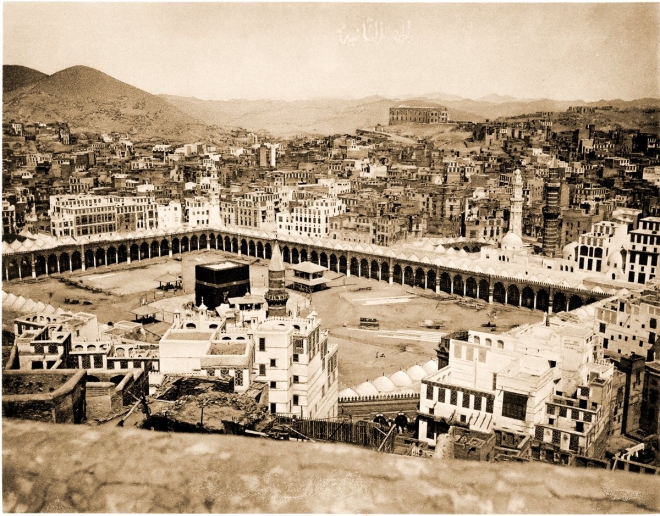 ABU DHABI: More than five decades after the world’s first photograph was produced with a camera, an army engineer ventured to the ancient city of Makkah and made history by chronicling the Muslim world’s holiest site on film for the first time.

Egyptian-born Muhammad Sadiq Bey had traveled several times to western Saudi Arabia’s Hijaz region in an official capacity as treasurer of the pilgrims’ caravan, first visiting in 1861 and taking with him a device known as a wet-plate collodion camera, a technique invented in the 1850s, which used glass-plate negatives.

In 1881 Bey, who wrote four books about his visits to the Grand Mosque and the Prophet’s Mosque, returned to the Hijaz and became the first person to take photographs of the holy cities of Makkah and Madinah and the Hajj from multiple angles, as well as capturing the Kaaba, Islam’s holiest shrine, images that are now on view at new exhibition at the Louvre Abu Dhabi.

Photographs 1842–1896: An Early Album of the World, which runs until July 13, is an exploration of the development of photography in its first years of existence. Bey’s photos of Makkah give a rare snapshot of what life in the holy city was like over a century ago.

It is the works of Bey which excite the exhibition’s curator, Christine Barthe most.

“While the exhibition focuses on 44 different countries, two of the important pictures for us were the pictures taken in Makkah in 1881; this was an important element both because of the site, the fact it was photographed so early and also that the photograph was taken by an Arabic photographer, so it really is a symbolic showcase of the exhibition,” said Barthe, who is head of the photographic collections heritage unit at the Musée du quai Branly-Jacques Chirac.

“What remains fascinating is that you get the chance to stand in front of one of the most photographed places on earth — a site that has been photographed so many times — and (that) allows you to realize that there was once a time that someone captured this site for the very first time and saw this site in this very unique way.

“We are now very familiar with the image of Makkah, but once it had never been captured on film. This is a moment of history.

“I hope that many people will have a special interest in these pictures. I think that is the interest of the exhibitor to ensure visitors from across the world come — but also have a special connection with one or two pictures that hold such cultural relevance.”

Barthe also pointed to the works of French sculptor Frédéric Auguste Bartholdi — best known for designing the Statue of Liberty — and his imagery of the Kingdom.

“Bartholdi made a trip to Saudi Arabia between 1855-1857, and we have a special place for his images in the exhibition,” said Barthe. “He depicted Saudi Arabia in a different light; showing the landscapes and places where he lived during that period.”

His imagery offers people a humanizing glimpse of Saudi nationals during the mid-1800s, a reflection of what the undeveloped Kingdom and its inhabitants looked like before it was transformed by the discovery of vast oil reserves in the 1930s.

“Architecturally, Bartholdi’s pictures are very beautiful,” said Barthe. “He had a very special way of taking pictures; he had this way to show his objects slowing down. It really is a fascinating and very early record of the region — images that, until now, have not been well known.”

Barthe said the exhibition was born from a desire to present some of the world’s earliest photographic images. “This exhibition offers, for the first time, a global history of photography, whose development in South America, Africa, the Middle East and Asia reveals a fascinating play of difference and similarity.

“I believe it will be full of surprises for visitors, who will not only discover the first evidences of the visual mapping of the world, but also question our fascination and our current dependence on photographic images.”

This exhibition offers, for the first time, a global history of photography Ismail Noor. (Supplied photo)

Photography was born commercially in 1839, when several European nations expanded their colonial empires to territories in Africa, Asia, America and the Middle East, driven by an insatiable quest of discovery. Subsequently, photography crossed the borders of Europe and the seas, accompanying religious missions, scientific, diplomatic and military expeditions and even individual travelers.

The 250 photos in the show, which are on loan from French museums, include historic photographs from the Philippines, including works by Pedro Picon, the creator of one of the earliest photographs in the country.

Lala Deen Dayal, considered the best Indian-born photographer of his time, is also represented with views of Bombay, Hyderabad and a portrait of the Maharajah de Orchla, dated 1882. In India, photography was of interest to many ruling families at this time. Dayal quickly established himself as the photographer of the nobility, notably documenting the royal tour of the Prince and Princess of Wales through India in 1875-76.

Visitors will be able to discover works by other prominent early photographers, including Luis Garcia Hevia from Colombia, the Abdullah brothers and Pascal Sebah from Turkey, Marc Ferrez from Brazil, Lai Fong from China, Kassian Cephas from Indonesia, Alexandre Michon and Nikolai Charushin from Russia, Francis Chit from Thailand, and Ichida Sôta and Suzuki Shin’ichi II from Japan.

Mohamed Khalifa Al Mubarak, chairman of the Department of Culture and Tourism of Abu Dhabi (DCT), said the exhibition was held to give visitors to the UAE capital a chance too “travel to new places and explore different regions of the world through the eyes of nineteenth-century European travelers.”

“Pioneering photographers played a key role in making other cultures visible and accessible to people back home, the same way our audiences record their daily experiences to share them with their family, friends and online communities.”