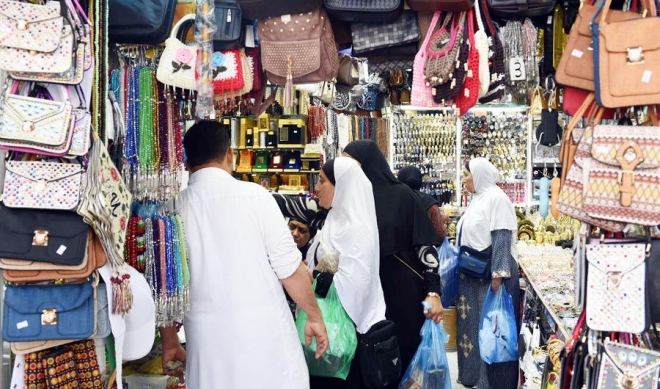 MAKKAH: Pilgrim spending in Makkah and Madinah needs to be examined and encouraged, Hajj and Umrah sector experts have told Arab News.

Millions of Muslims visit the two holy cities annually, with more than 6 million umrah visas issued this year so far, but their shopping needs to be stimulated with a greater offering of specialty products that showcase Saudi Arabia and the two holy cities.

Egyptians top the list of spending, according to the head of the tourism and hotels committee at the Makkah Chamber of Commerce and Industry, Aziz Awliyaa.

“Egyptians top the list of spending, followed by Iraqis, Algerians and Turks,” he told Arab News, adding there was a connection between the pilgrim’s economy back home and his or her purchasing power and aspirations when in Saudi Arabia.

Saad Jameel Al-Qurashi, the former chairman of the National Committee for Hajj and Umrah at the Makkah Chamber of Commerce and Industry, said that different nationalities spent different lengths of time in the Kingdom.

“Indian, Pakistani and Bangladeshi nationals prefer to stay for 30 days, while some Egyptian pilgrims prefer to stay up to 20 days,” he told Arab News. He said that pilgrims spent up to $1,000 in a 10-day period.

Al-Qurashi said that one way to cater for a diverse international audience was to globalize food and beverage outlets.

“There is a need to open foreign restaurants in Makkah to give pilgrims the opportunity to leave their hotels, visit these restaurants and taste dishes in a modern setting that stimulates the hospitality sector and supports diversity for more than 150 nationalities that meet in one place during Ramadan.”

He explained that purchasing power was not just determined by nationality or the economic situation in a pilgrim’s home country. There was also a desire to find added value, he said. “Pilgrims are keen to buy items that they do not find in their countries, and that imposes the challenge of diversifying markets so they cater to the pilgrims’ various requirement.”

There was a “dire need” to establish research economic bodies to examine expenditure rates and requirements for pilgrims and to cope with the increase in pilgrim numbers every year, he added.

Al-Qurashi said there was also a need to come up with special gifts for pilgrims who preferred souvenirs made by Saudi nationals and “exemplified the spirit of Makkah.”