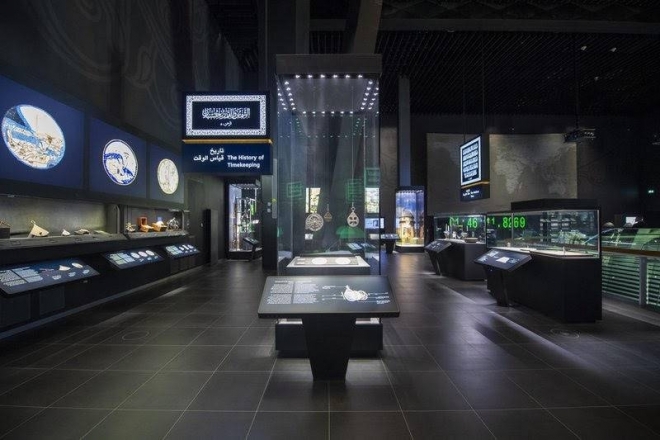 MAKKAH — The clock tower museum in Makkah has been opened to visitors to make a journey of faith through the universe starting from the beginning of Ramadan on May 6.

The museum occupies the top four floors of the clock tower in Makkah. One of the floors is dedicated to the sun and the moon; another to time measurement and the third to the giant clock itself while the fourth is a balcony where the visitors can enjoy a panoramic view of the Grand Mosque.

The non-profit Misk Foundation established by Crown Prince Muhammad Bin Salman, deputy premier and minister of defense, is operating the museum, which is located on the highest point in Makkah.

The museum was designed to take the visitors on a tour of the universe, which will tell them how people used to measure the time in olden days. They used the sun, the moon and the galaxies for the purpose.

The visitors will come to know the methods people in ancient times used to measure time through the use of the universe's two clocks — the sun and the moon.

They will also be able to see the largest clock in the world, which is considered a miracle in watch making.

The first floor contains the Makkah clock, which was designed and manufactured jointly by a number of international watch companies. They made various components of the clock, making it the most accurate in the world in giving time.

The second floor dedicated to time measurement explains to the visitors how man in old ages was keen to know the time. Man had invented many tools and systems for time measurement through the ages. They included water and sand clocks, the pendulum and the pocket watch.

Man in the old ages closely followed the orbits of the sun and the moon to decide the dates, the direction of the Qiblah and the prayer time.

On the third floor of the museum, the visitors will have a treat of the sun, the moon and the earth. The visitors can see how man in the past relied on the celestial bodies to organize his life and activities. They will also come to learn how the eclipse and other solar phenomena take place in the universe.

On the fourth floor, the visitors will have a chance to deeply understand the space and the stars, and how man used them in the past to determine his destinations.

Lastly, the balcony of the clock tower will give the visitors a panoramic view of the vast Grand Mosque complex and its surroundings.


⇐ Previous:
Treat pilgrims with kindness: Shiekh Sudais
Next: ⇒
Breaking the fast at the Prophet’s Mosque in Madinah