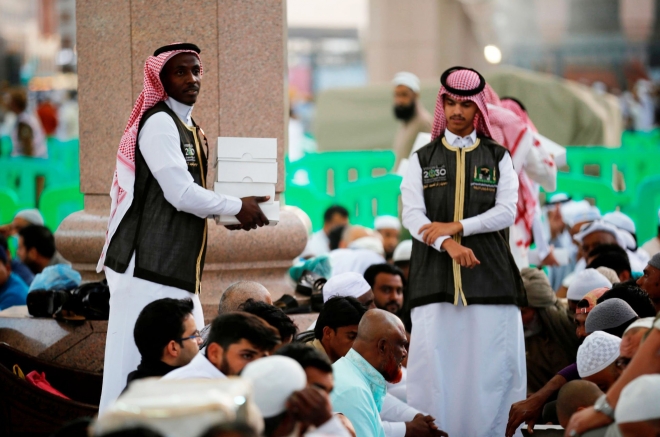 MADINAH: Ramadan iftars generously hosted by the people of Madinah at the Prophet’s Mosque are being enjoyed by thousands of worshippers, visitors and residents.

Pilgrims from the Kingdom and throughout the world are being served iftar meals after a long day of fasting as part of a service that brings together Muslims of many nationalities.

Jamaan Al-Asiri, director of public relations at the Agency of  the General Presidency for the Prophet’s Mosque Affairs, said mosque staff had been working hard preparing and setting up eating areas and assisting food providers. He said that after the completion of Asr prayer, iftar meals are brought into the mosque through specified doors.

“The entry of the meals is supervised by observers at the mosque’s doors. After laying down plastic sheets inside the mosque, food is arranged until it is time for Maghrib prayer,” Al-Asiri added.

“After Muslims break their fast and before the Maghrib prayer is held, all the plastic sheets and remains of food are removed in a quick and orderly manner in cooperation between the workers, the supervisors, and the providers.”

The meals include hot food such as rice and meat, in addition to fruit, bottled juices, dates, yogurt, coffee and water. Al-Asiri said cleaning operations take place after iftar and before Maghrib prayer.