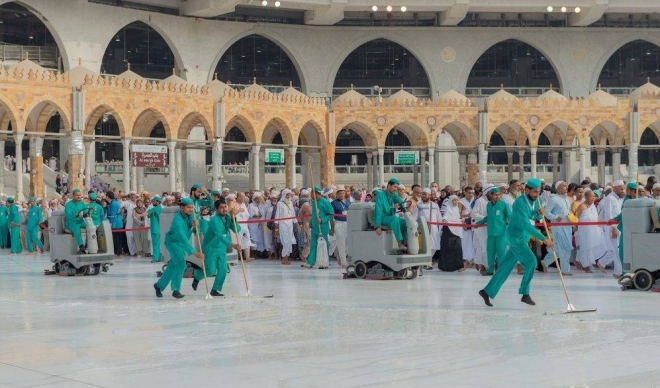 MAKKAH – The Presidency for the Affairs of the Two Holy Mosques is exerting great efforts to clean and perfume the Grand Mosque daily, including wiping and sterilizing its floors, surfaces and piazzas, with a total area estimated at one million square meters, Saudi Press Agency reported on Monday.

The presidency has hired over 2,000 male and female workers, who are available round-the-clock, working in four shifts.

Cleaning the whole Grand Mosque takes only 45 minutes, without obstructing the pilgrims, visitors and worshipers from carrying out their rites. Cleaning of the circumambulation area (the Mataf) takes only 30 minutes and is carried out swiftly in a highly technical fashion, amid dense crowds of the faithful.

Some 30 special electrical cars, 67 other machines and 400 liters of water are used for cleaning and sterilizing the Mataf. The average quantity of water used for the cleaning process is one glassful of water for 12 sq. meters of the Mataf, whose area is nearly 500 sq. meters.

Cleaning equipment and implements are not harmful and are environment friendly. The same applies to the detergents. They are organic and safe. There are specialist teams to collect some 100 ton of garbage daily from the Grand Mosque and its piazzas. The quantity of garbage collected daily rises to 300 ton during peak periods. It is gathered within a record time. Over 2,000 garbage dumpsters are provided in and outside the Grand Mosque.

Several Umrah pilgrims and visitors praised the services provided by the presidency in the Grand Mosque.

Muhammad Asif from Bangladesh said: “I’m pleased with the great, distinctive services and the very high standard of hygiene. What attracted my attention was the way the floors of the Grand Mosque were cleaned swiftly and in an organized fashion without any inconvenience to the Umrah pilgrims and worshipers. Large quantities of rose water and Oud perfume are used. The cleaners carry out their work speedily and in a professional way.”

Other Umrah pilgrims and worshipers who commented the cleaning process in the Haram included Fayiz Awad Abdullah and Isa Muhammad Mahmoud Abdullah from Sudan, and Muhammad Ahmed from Egypt. They expressed admiration for the swift and skillful way the Grand Mosque is cleaned and sterilized. They thanked Custodian of the Two Holy Mosques and the Crown Prince for the care extended to the Two Holy Mosques and the efforts being exerted for the comfort of the pilgrims, visitors and worshipers at the Grand Mosque and the Prophet’s Mosque.

They prayed to Allah Almighty to protect the Kingdom from the evil of those who harbor hatred and jealousy toward it.