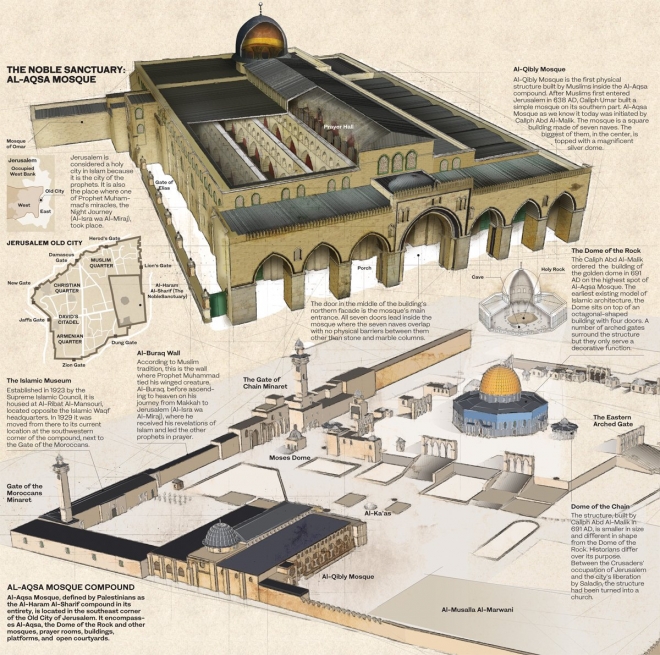 AMMAN: “There is a spot just in the center of Al-Qibli Mosque where you feel so light when you stand in it.”

This is the way Wasfi Kailani, of the Hashemite Fund for the Restoration of Al-Aqsa Mosque, describes his favorite spot within Jerusalem’s Al-Aqsa Mosque, the UNESCO World Heritage site also known to Muslims and Palestinians as Al-Haram Al-Sharif.

The spot that Kailani refers to is not far from Saladin’s pulpit, rebuilt by King Abdullah II of Jordan after it was destroyed in a 1969 arson attack.

“I feel that the holiest spot in the entire compound is in the center of the mosque,” he told Arab News. “It is the place from where Prophet Muhammad ascended to the heavens to meet God Almighty with all the prophets with him.”

For Ziad Khalil Abu Zayyad, a spokesman for Fatah, the Palestinian political party, the most special spot is a small room under the Dome of the Rock mosque.

“It is called the Souls Cave,” Abu Zayyad told Arab News. “I like it for the high level of energy and spirituality that can be felt while praying inside it.”

His views are echoed by Ahmad Budeiri, a former BBC staffer, who was born in Jerusalem and has spent all his life there. “I enter the mosque to experience the beauty of its architecture,” he said. “Then I go down to the cave and I get the feeling that all the spiritual meaning in the mosque is condensed in that small space.”

Abla Rweis, a mother of three from Nablus, told Arab News that her favorite spot is the mosque itself. “It has a special holiness to it as it is where the holy prophet Muhammad spent the night on his ascent to heaven.”

A little more than a decade on, Caliph Omar was in Jerusalem and he began building the first Al-Aqsa Mosque. Al-Aqsa means “the farthest,” a reference to the distance of Islam’s third holiest shrine from Makkah and Madinah in Saudi Arabia.

For Khalil Attiyeh, a Jordanian parliamentarian, the feeling while going down the stairs from the Dome of the Rock to Al-Aqsa Mosque is special. But for many worshipers and visitors, the entire 144 dunum (144,000sq meters) of the Al-Aqsa compound is sacred.

For Arafat Amro, the Islamic Museum located within the compound is special because of its priceless contents. “It is a window to civilizations and history,” said Amro, who is also the musuem’s director.

“Everything here, from parchments, wooden works and metal items to stone carvings, reflects different times. Visitors who came to this mosque down the ages from different locations went back with the history of their Arab and Muslim forefathers etched in their memories.”

The Islamic Museum is located close to both Al-Buraq Wall and a gate through which groups of Jewish extremists often make uninvited incursions with an armed Israeli security escort.

The area was cleared of Palestinians soon after the capture in 1967 of East Jerusalem by Israel, marking the beginning of the occupation.

For Hazem Shunnar, a respected Palestinian economist, Al-Buraq wall is what he often thinks about “because the Israelis took it by force.”