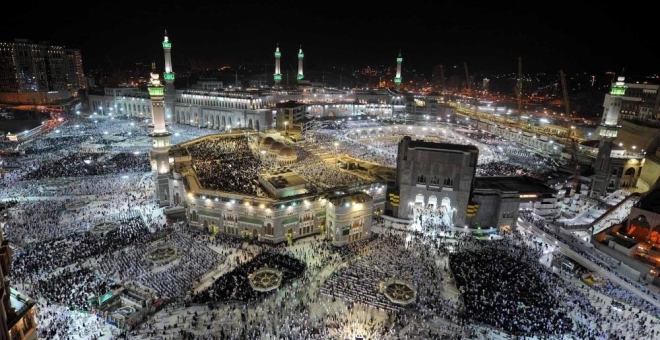 MAKKAH — Over three million worshipers, including Umrah pilgrims and visitors, attended Khatm Al-Qur’an prayers on Sunday, 29th night of the holy month of Ramadan, at the Holy Mosques in Makkah and Madinah.

Khatm Al-Qur’an prayers mark the conclusion of recitation of the whole Qur’an during night prayers of Taraweeh. Sheikh Abdurahman Al-Sudais, head of the Presidency for the Affairs of the Two Holy Mosques, led the prayers at the Grand Mosque where more than two million faithful joined him in offering the prayers.

Both mosques were packed with worshippers and the courtyards as well as the surrounding streets leading to them were overflowed. The faithful experienced their exalted spiritual moments in an atmosphere of tranquility, serenity, peace and security provided by the Saudi authorities.

At the Grand Mosque in Makkah, the gathering of worshipers was in the direct supervision of Custodian of the Two Holy Mosques King Salman and Crown Prince Muhammad Bin Salman, and personal follow up of Makkah Emir Prince Khaled Al-Faisal and Deputy Emir Prince Badr Bin Sultan.

Leading the prayers, Sheikh Sudais supplicated to Allah Almighty to forgive all Muslims on this blessed night and save them from the Hellfire. He prayed for safeguarding the Kingdom, its leaders, as well as all Muslim countries from all evil and to provide them with safety, security and stability.

The Haram Security Force, in coordination with the presidency, deployed hundreds of its members at some 170 gates and doors leading to the mosque. Traffic flow was streamlined. All the security bodies contributed to crowd management. The traffic flow was so smooth and there were no traffic jams or accidents reported despite the huge number of vehicles started streaming into the holy city from Sunday morning.

More than one million worshippers attended Khatm Al-Qur’an prayers at the Prophet’s Mosque in Madinah. Tens of thousands of worshippers are performing itikaf (seclusion and staying in the mosque with the intention of worshipping) in the both Holy Mosques during the last days of Ramadan.