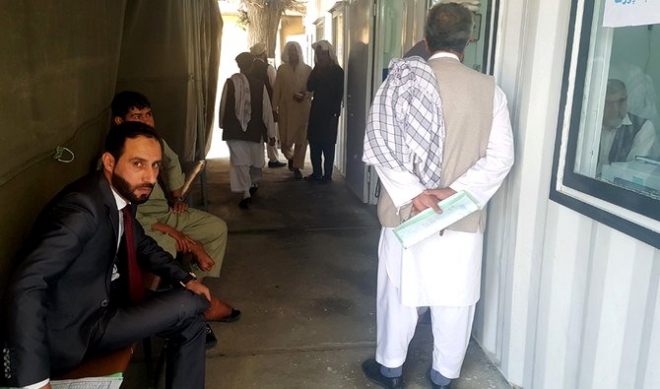 KABUL: Like many Afghans, Habibullah longed for years to perform the annual Hajj pilgrimage. Given the long list of Afghans who have been anxiously waiting for their turn, the 65-year-old carpenter never thought his luck would shine.

But last month, he got a call from an official at the Religious Trust and Haj Ministry in Kabul to tell him that his dream will soon come true.

“I became so excited because going to Hajj has been for years my top priority and I have been putting aside part of my income for years for this very purpose,” he told Arab News at a center for Hajis in Kabul.

“I am counting each hour and day for my flight. I am going there to seek forgiveness from Allah and pray for peace in my country and the world. I’m seeking to start a new life based on virtue and firm conviction afterwards.”

His other goal will be to urge fellow Afghan pilgrims to stop the tradition of offering gifts and lavish meals to relatives and acquaintances upon return from Hajj because the country was drenched in poverty and caught in decades of war. The money could instead go to help the needy, he said. “We have to change this culture and tradition because it is a waste of money and our religion forbids extravagance.”

Some 30,000 Afghans are set to perfom Hajj this year. The Afghan government has chartered Emirates and the national flag carrier, Afghan Ariana Airlines, for the pilgrims.

The cost of the return trip, accommodation and food for each Afghan pilgrim stands at $2,700 per person, but they will also spend on average at least $1,000 on small gifts such as prayer mats, prayer beads and scarfs to relatives and family members and a small feast after the visit as part of the tradition.

Pilgrims throw lavish parties and give expensive gifts such as luxury watches and even gold jewelry to their friends and family.

Many Afghans, who can just afford to cover the Hajj expense but not the extravagance that follows, have refrained from registering for Hajj because they would not be able to maintain the tradition.

The comparatively wealthy pilgrims can take frequent Hajj journeys, which deprives some of the other visitors.

Faced with a huge backlog of pilgrims — some waiting for years — the Afghan Ministry of Religious Trust and Hajj said that it has imposed a fine for repeated Hajj performers in order for them to give chance to the first-time visitors.

The ministry has also launched a campaign to encourage pilgrims to avoid frequent visits and instead help their less privileged countrymen cover the costs as Afghanistan’s humanitarian crisis and poverty grinds on.

With the Hajj season around the corner, business is booming for those who trade in prayer-mat, beads, scarves and perfumes, which the pilgrims usually offer as gifts upon their return.

“On average, each Haji (pilgrim) buys 100 prayer mats, prayer beads, dates, sweets among other things. Business is good for us,” Samir, a 22-year-old shopkeeper in Kabul, told Arab News.

Some of the pilgrims belong to families of government security forces killed during the recent war. Their cost of Hajj is borne by the government.

However, poor management, nepotism and a lack of government transparency means the process is either slow or sometime not fair, Said Mumtaz, 50, the father of a slain soldier claimed.

“I was supposed to go for Hajj two years back but could not due to my heart ailment. Now I am reapplying.” said Mumtaz, who comes from eastern Nangarhar.

He said that officials told him he had lost his chance of going after failing to fulfil his chance two years back, but he is struggling to change the policy.

“If you have something under your name as your right or property, then you deserve it and should be able to use it when you can,” he said.

“If I can go to Hajj, I will invite others to perform it too and urge people to do the right thing. I will also pray for our leaders to be shown the right path and for them to show sympathy for ordinary Afghans because poor ones like myself suffer, not our leaders who live in cozy and secure houses, drive in armored vehicles and their families live abroad,” said Mumtaz.