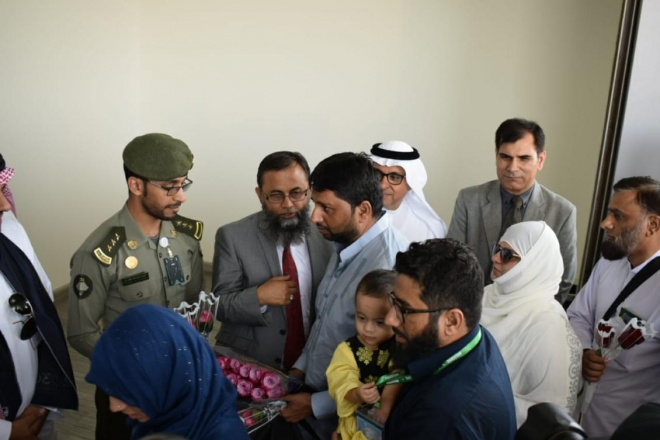 Raja Ali Ejaz, Pakistan’s Ambassador to Saudi Arabia, who welcomed the pilgrims on arrival, praised the implementation of the “pioneering” initiative, which is aimed at reducing the time pilgrims from around the world spend completing travel documentation at departure and arrival points.

This is the first year it has been implemented in Pakistan, and the arriving pilgrims were full of praise for the smooth process they experienced at Islamabad airport, where they were seen off by several ministers and the Saudi Arabia Ambassador to Pakistan Nawaf bin Said Al-Malki. Pakistan’s aviation minister, Ghulam Sarwar Khan, delivered a speech praising the deep-rooted ties between Pakistan and Saudi Arabia, and lauding the Makkah Road Initiative.

Pakistan’s Minister for Religious Affairs and Inter-Faith Harmony Noor-ul-Haq Qadri noted that Pakistani pilgrims receive great support throughout the year —  whether during Hajj or Umrah —  from the Kingdom, and expressed his gratitude to King Salman and Crown Prince Mohammed bin Salman for their “great service” to Islam and Muslims, including their custodianship of the Two Holy Mosques.

Al-Malki said that the inauguration of the Makkah Road Initiative in Pakistan is a “great achievement in the system of services being provided by the Kingdom for pilgrims within the framework of the interest of the leadership of the Kingdom, especially the services of the Two Holy Mosques and their visitors of Muslims from all over the world.”

He added that the initiative could not have succeeded without the participation of a number of government agencies in order to improve the services provided to pilgrims and to consolidate the Kingdom’s pioneering role in serving Muslims from all over the world.

More than 225,000 pilgrims traveling from Malaysia, Indonesia, Pakistan, Bangladesh and Tunisia are expected to benefit from the Makkah Road Initiative this year.