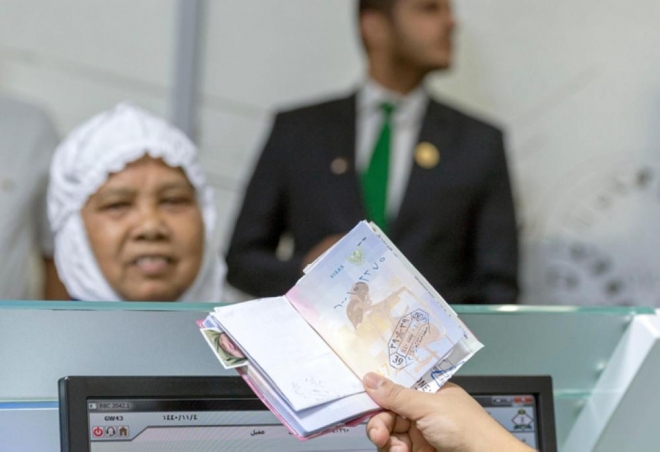 Jakarta — The Makkah Route Initiative for this year’s Haj season was inaugurated on Sunday at Soekarno–Hatta International Airport in Indonesia in the presence of Indonesian Vice President Jusuf Kalla, Indonesian Minister of Religious Affairs Dr. Lukman Hakim Saifuddin, Saudi Ambassador to Indonesia Essam Abed Al-Thaqafi, and a number of officials.

Following the inauguration, the first flight of Indonesian pilgrims left for the Kingdom with 410 pilgrims onboard.

The Indonesian Vice President was briefed on the services being provided by the Saudi team.

Saudi Ambassador to Indonesia said the implementation of the Makkah Route Initiative in Indonesia for the second year confirms the success of cooperation between the two countries’ authorities to serve Indonesian pilgrims and facilitate their journey from Soekarno–Hatta International Airport to the Kingdom.

Saudi Arabia last year launched the Makkah Route Initiative in Indonesia and Malaysia in order to facilitate the journey of pilgrims.

The service offers pre-clearance of immigration for pilgrims at their respective points of embarkation.

The decision to introduce the service in its first year in Malaysia and Indonesia was made on the basis of the large numbers of pilgrims coming from these two countries.

The services include issuance of visas, customs and passport procedures, facilitating health requirements, as well as sorting luggage according to transportation and housing arrangements in Saudi Arabia.

These pre-departure services will not only ease the arrival of pilgrims in the Kingdom, but will also allow them to head directly to their accommodations in Makkah and Madinah without having to deal with time-consuming procedures.

Luggage is handled by agencies that transport baggage directly to visitors’ accommodation.