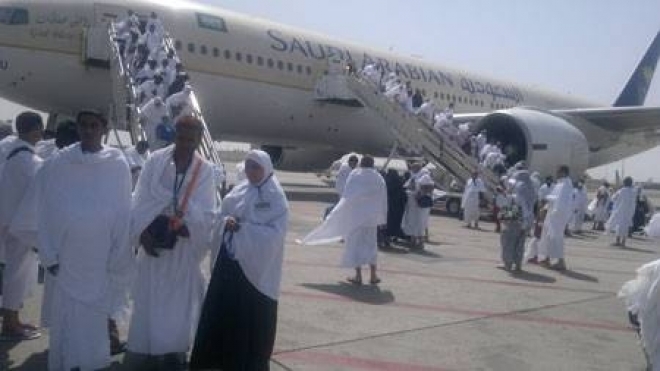 JEDDAH — Saudi Arabian Airlines said it has reinforced its fleet of 165 aircraft with 17 new planes to be able to transport around 1.2 million domestic and foreign pilgrims from about 100 destinations worldwide for the upcoming Haj.

The airline said it will airlift the guests of Allah to the Kingdom and back home.

The Saudi national flag carrier said the number of pilgrims it will transport this year is up by about 10 percent over their number last year.

Director General of Saudia Saleh Al-Jasser said all the sectors were working around the clock to ensure the pilgrims with the best of services on board and on the ground.

He said Saudia and the General Authority of Civil Aviation (GACA) were working in unison to implement the directives of the leadership to ensure the pilgrims and visitors with consummate services that will enable them do their rituals in ease, peace and comfort.

"We are exerting all efforts to provide the pilgrims with the best of services within the goals and objectives of the Kingdom's Vision 2030," he said.

Jasser said Saudia extended a variety of services to the passengers including the issuance of boarding passes to the pilgrims for both arrival and departure phase long time before their travel date.

He said the pilgrims do not have to come personally to the sales offices to confirm their booking back home.

"We want the pilgrims not to worry about their air trips but rather to focus on their worship," he said.

The director general said Saudia includes on each of its flights crew members who speak different languages to be able to communicate easily with the passengers.

"We also screen onboard films to guide the pilgrims on the correct methods of performing the pilgrimage in addition to distributing awareness booklets and pamphlets," he said.


⇐ Previous:
Streets in Makkah to have special tracks for the blind
Next: ⇒
King Salman to host 1,000 relatives of Palestinian martyrs for Haj