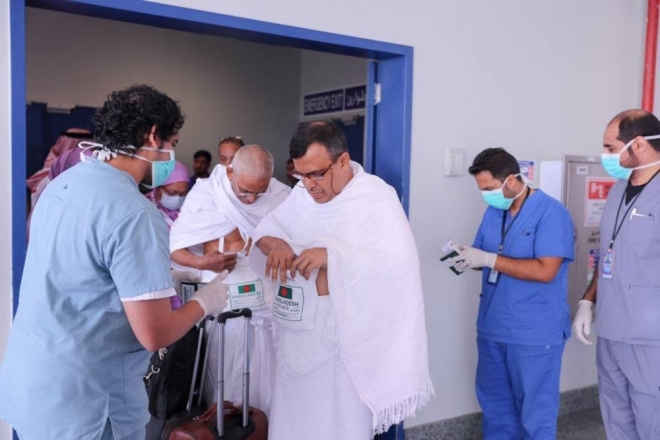 JEDDAH — The department of health affairs in Jeddah has set up four health centers at King Abdulaziz International Airport in Jeddah (KAIA) to medically examine and treat pilgrims arriving from various countries of the world.

The centers are working throughout the day and night to check the validity of the health certificates the pilgrims are supplied with in their countries.

Spokesman for the centers Dr. Mohammed Jamal Felimban said the centers are providing the pilgrims with both preventive and curative services.

He said there are four well-equipped ambulance cars working at the airport to transport pilgrims suspected with contagious diseases to a certain hospital dedicated for this service.

Felimban said a rapid deployment team will deal with the pilgrims suspected to have epidemics by transporting them to seclusion rooms inside the airport before taking them through safe tracks to the nearby King Abdullah Medical Complex.

Felimban said 26,771 pilgrims were vaccinated against meningitis at their home countries and 3,659 against small box.

He said a total of 186 aircraft were cleared and three pilgrims referred to the centers for treatment.

He said there were no fatalities reported at the centers, which were visited by 471 pilgrims so far.